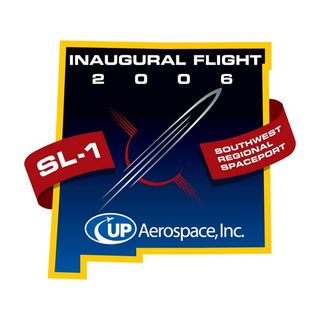 Workis underway in preparing for the inaugural rocket blastoff from the New Mexicospaceport grounds.

Concreteis being poured and fabrication of a pad and associated infrastructure is beingput into place--essentially bringing the spaceport to life.

Meantime,the UP Aerospace SpaceLoft XL is being readied for its suborbital mission fromthe southeast section of the New Mexico spaceport, designated for verticallylaunched rockets.

"Amajor milestone has been reached in the spaceport'sconstruction," said Jerry Larson, president of Connecticut-based UPAerospace. The center section of the launch pad has been poured which willanchor a multi-ton rocket launcher. The remainder of the launch pad willbe poured by the end of this month, Larson told SPACE.com.

Ahydraulically-controlled rocket launch rail, weighing 7 tons (over 7,000kilograms) and standing 56 feet (17 meters) tall, has been transported to New Mexico. "Once in place,it will be visible for miles around," Larson said.

Whenthe SpaceLoftXL climbs into the sky, it will be packed with a set of creative payloads,said Eric Knight, chief executive officer for UP Aerospace.

New Mexico State University is testing avehicle attitude sensor that will be used in the design of a "nanosat"satellite, Knight told SPACE.com. Students at the University of Colorado at Boulder and the ColoradoSpace Grant Consortium have developed a payload to measure and record themicrowave radiation levels and cosmic rays during the suborbital flight.

Andstudents at Brown University in Rhode Island, in conjunctionwith engineers at AeroAstro, Inc., have developed a research package thatincludes a prototype star tracker and data logger. Also on board the rocket isa Central Connecticut State University research packagethat includes a variety of thermocouples to analyze and record thecharacteristics of the space environment.

Inaddition, more than 40 experiments from high school students from across America are to be flown.

Toopen the space-access door to students at this level, Knight said that UPAerospace has partnered with the Connecticut Center for AdvancedTechnology (CCAT) and the National Aerospace Leadership Initiative (NALI).These organizations have established "LaunchQuest", a program that letsyoungsters conduct their own space-flight research.

Onthe commercial side, a number of firms from the U.S. and Europe are on the flight.But due to confidentially agreements, Knight can't offer too much detail onthese entrepreneurial payloads.

From launch to landing

TheSpaceLoftXL is a single-stage, solid-propellant rocket.

Blastingoff from its New Mexicospaceport pad, the rocket will accelerate to five times the speed ofsound--nearly 3,400 miles per hour--in just 13.5 seconds, Larson said. It willreach the international definition of space, 62 miles or 100 kilometers, injust a minute-and-a-half and achieve a flight apogee of about 70 miles (113kilometers) shortly thereafter, he said.

The mission includes support from White Sands Missile Range, located just tothe east of the spaceport. The SpaceLoft XL rocket includes a transponder thatwill be tracked by the radars at White Sands providing the highest quality datapossible for use in obtaining a spaceport license from the Federal AviationAdministration, Larson explained.

Asthe rocket arcs over and begins its return from space, it will separate intotwo sections: an upper nosecone/payload section and a lower rocket boostersection.

Bothrocket components are to be recovered by parachutes approximately 33 miles (53kilometers) away from takeoff, touching down on the White Sands Missile Range. The entire flightfrom launch to landing will take about 15 minutes.

Work ahead before thumb's up

Thegoal is for launch site buildings to be in put in place mid-April, Larson said.

"We'llthen begin our site activation and vehicle pathfinder activities at thespaceport. Computers will be brought in. Cables run. Communication systems,both wired and wireless, will be set up," Larson stated. "There's a lot of workto do before a space launch can be conducted."

Regarding the launch date, it's still a few months away, Larson continued.Testing of the entire launch facility and the rocket's systems must be done beforeUP Aerospace gives the thumb's up for the mission, he said.

"Wewant to make sure the launch and recovery are absolutely flawless," Larsonsaid.