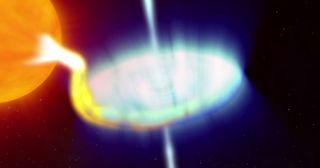 : A stream of gas falling onto a black hole may have generated a massive X-ray light show.
(Image: © NASA's Goddard Space Flight Center)

After taking a 26-year nap, a waking black hole released a burst of X-rays that lit up astronomical observatories on June 15 — and it's still making a ruckus today.

Astronomers identified the revived black hole as an "X-ray nova" — a sudden increase in star luminosity — coming from a binary system in the constellation Cygnus. The outburst may have been caused by material falling into a black hole.

The burst was first caught by NASA's Swift satellite, and then by a Japanese experiment on the International Space Station, called Monitor of All-sky X-ray Image (MAXI). [Black Hole Wakes Up With A Bang (Video)]

"Relative to the lifetime of space observatories, these black-hole eruptions are quite rare," Neil Gehrels, Swift's principal investigator at NASA's Goddard Space Flight Center, said in a statement. "So, when we see one of them flare up, we try to throw everything we have at it, monitoring across the spectrum, from radio waves to gamma-rays."

The binary system responsible for the eruption is called V404 Cygni, according to the statement from NASA. It's made up of a star slightly smaller than the sun that orbits a black hole 10 times its mass. The orbital period is just 6.5 days, which makes it more than 10 times faster than Mercury orbits our own sun, the statement said.

Because the star orbits so closely to the black hole, the massive body pulls a stream of gas away from the star. Over time, the gas forms into a disc around the black hole.

When the gas is cooler, it's able to resist the black hole's pull. But as more gas gathers and it warms, eventually, the dam bursts, and gas is pulled toward the black hole. The rapidly moving, hot gas radiates an outburst of X-rays as it falls toward the gaping black maw, according to NASA.

This stellar duo has been active before, but only sporadically. The system was caught fluctuating in visible light in 1938 and 1956, and then in X-rays in 1989. The latter outburst was observed by instruments aboard Russia's Mir space station and a Japanese X-ray satellite called Ginga.

Since this most recent outburst began, V404 Cygni has fluctuated several times in brightness — sometimes up to 50 times brighter than the Crab Nebula, a very bright source in X-rays, said Erik Kuulkers, a project scientist for the European Space Agency's INTEGRAL satellite, one of the satellites that is studying V4040 Cygni. It also has caused more than 70 "triggers" of the burst monitor on NASA's Fermi Gamma-ray Space Telescope in a single week. Usually, in the same time period, the telescope sees five times fewer triggers from all objects across the sky.

These triggers send email alerts to professional astronomers in the field, which led to a unique problem: "Achievement unlocked: Mailbox spammed by a black hole," David Yu, a scientist at the Max Planck Institute of Extraterrestrial Physics in Germany, who works on the Fermi gamma-ray burst monitor, joked on social media.

The flares are ongoing. Many observatories around the world — including Swift, Fermi, MAXI, INTEGRAL and the Italian Space Agency's AGILE — will continue to follow the bursts.