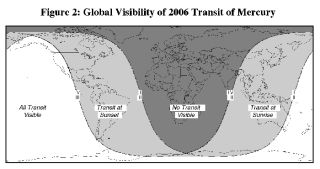 Map shows where on Earth the Mercury Transit will be visible and not visible. Image
(Image: © NASA)

On November8, Mercurywill transit the Sun. From Earth, we'll see the silhouette of Mercurytravel across the disk of the Sun. Transits are uncommon but predictableevents. The geometry of Mercury (or Venus), the Earth and the Sun has to bealigned precisely for a transit to occur. Most of the time, these inner planetscross above or below the disk of the Sun.

Historically,transits of Mercury and Venus promised a method to better measure the distanceto the Sun. Johannes Kepler predicted and then endeavored to see a transit ofMercury in 1607. Likely, he observed a sunspot with his camera obscura--twoyears before Galileo discovered sunspots with his primitive telescope in 1609.Later, telescopes aided transit observers in estimating the scale of the solarsystem. This is a difficult method, fraught with problems of timing, opticaleffects caused by Earth's atmosphere, poor weather and other complications.Observing transits gave us the first reasonable estimates for the distancescale of the solar system, but other methods have superseded transitobservations. Although solar transits are now interesting rather thancompelling for scientists, transit observations are far from dead.

NASA'sKepler Mission will be the first space mission to search for Earth-size andsmaller planets around other stars in our neighborhood of the galaxy. It'snamed for Johannes Kepler, the first astronomer to predict a transit. TheKepler spacecraft is a special-purpose telescope that will precisely measurethe light variations from distant stars, looking for planetary transits.Searching for transits of distant "Earths" is like looking for a drop inbrightness when a moth flies across a searchlight. Measuring repeated transits,all with a regular period, duration and change in brightness, provides arigorous method for discovering and confirming planets and their orbits--planetsthe size of Earth and smaller in the habitable zones around other stars. NASA'sKepler Mission launches in 2008, and will search more than 100,000 stars forevidence of other Earths in transit across their stars. We'll learn whetherEarth-size planets are common or rare.

Here athome, the transit of Mercury is a good reason for a daylight astronomy event.The transit will last for almost 5 hours, and observers in the Americas,Australia, eastern Asia and the Pacific Ocean will be able to see all or partof Mercury's excursion across the disk of the Sun. (This transit will not bevisible from Europe, Africa and western Asia--it will be nighttime there whenthe transit occurs.) If you will be on the sunny side of planet Earth, now'sthe time to plan an event with your local astronomy club. [See map of transit visibility here.]

More than200 astronomy clubs across the US are part ofthe Night Sky Network (NSN), a network of amateur astronomers who areinterested in sharing astronomy with the public. Participating NSN clubsreceive kits of materials that support star parties, mini-lessons on astronomy,demonstrations of astronomical concepts. For NSN members, teleconferences withscientists offer further information on current astronomical events, like thetransit of Mercury. In early September, a new kit was distributed to NSN clubs:"Shadows and Silhouettes." This new kit was developed by the AstronomicalSociety of the Pacific in collaboration with the Kepler Mission Education andPublic Outreach program, which is conducted by the SETI Institute and LawrenceHall of Science at University of California Berkeley in collaboration with NASA. So far, 160 clubs havereceived the new materials, with more applying for their kits each day.

"Shadowsand Silhouettes" provides the tools for demonstrations and short lessons onshadows and silhouettes in the astronomical context: how shadows help usobserve craters on the Moon, phases of the Moon, eclipses, and--ofcourse--transits. Amateur astronomers across the nation will be reaching out tothe public to demonstrate and explain transits and their importance for NASA'sKepler Mission. On November 8, some will be observing the transit of Mercury.You may be able to observe this transit, almost four centuries after JohannesKepler first predicted that Mercury would transit the Sun in 1607.

For moreinformation, please visit these websites:

-         Night Sky Network. Identify a NSN clubin your region, or, learn how your astronomy club can become a member.

-         ASP's"Universe in the Classroom:" Learn how to observe the transit safely.

-         NASA's KeplerMission: Learn about this mission to find other Earths; build a transitmodel.