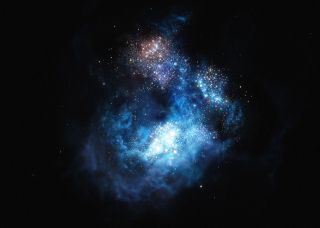 The incredibly bright and old CR7 galaxy, captured here in an artist's impression, seems to shelter some of the universe's earliest stars. This is the first time this type of star has ever been identified.
(Image: © ESO/M. Kornmesser)

Astronomers have found what looks like some of the very first stars ever formed in the universe, forged from hydrogen created in the Big Bang.

Such stars, while long theorized, have never been observed before now, according to scientists with the European Southern Observatory, which announced the discovery today (June 17). The stars act as a bridge from the universe's early, hydrogen-filled existence to the many heavy elements surrounding us today. ESO officials created a video animation of the bright galaxy, called CR7, to illustrate their find.

The newly discovered pocket of stars perches in an extremely bright, old galaxy called CR7. Researchers identified the galaxy while using the European Southern Observatory's Very Large Telescope to peer back to a time about 800 million years after the Big Bang, when the first stars and galaxies were forming from residual hydrogen. The universe is about 13.7 billion years old. [From the Big Bang to Now in 10 Easy Steps]

"The discovery challenged our expectations from the start, as we didn't expect to find such a bright galaxy," David Sobral, lead author on the new paper, said in a statement.

Sobral and his colleagues were searching for distant galaxies, but found that one in particular was an anomaly. The group soon realized that not only was the galaxy incredibly bright — the most luminous distant galaxy ever found, he said in the statement — but it had all the hallmarks of the universe's earliest stars.

The Earth's sun shows its age by the elements it contains: mostly hydrogen and helium, sure, but a multitude of metals formed in earlier stars also lend their heft to the sun's density. The first stars to condense after the Big Bang, called Population III stars, would have been up to a 1,000 times larger than the sun and would have contained only hydrogen, helium and lithium at first.

These Population III stars would have been short-lived, exploding as supernovasafter just 2 million years of blazing life, releasing the elements they created. (For comparison, the sun is about 5 billion years old and is estimated to last about 10 billion years). Later stars could form from those remnants and forge even heavier elements.

"Even as a child, I wanted to know where the elements come from: the calcium in my bones, the carbon in my muscles, the iron in my blood," study co-author Jorryt Matthee, at Leiden University, said in the statement, adding that all of those elements were released by the first-generation stars. "With this discovery, remarkably, we are starting to actually see such objects for the first time."

The researchers found that, in among other stars of varying ages, CR7 had areas that didn't emit signals for any elements heavier than helium — likely clusters of Population III stars. The assortment of stars suggests that Population III stars may be easier to find than expected, since they can sit among newer stars instead of being banished to the oldest, faintest galaxies.

"Those stars were the ones that formed the first heavy atoms that ultimately allowed us to be here," Sobral said. "It doesn't really get any more exciting than this."

The research was detailed in a paper accepted for publication June 4 in The Astrophysical Journal.