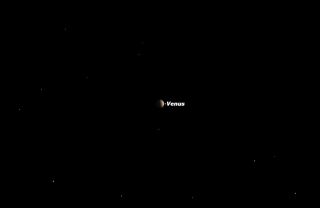 On Saturday, June 6, Venus reaches its greatest angular distance from the sun, and appears like a tiny first quarter moon in a telescope.
(Image: © Starry Night Software)

If you've been watching the sky in the early evening lately, you can't have missed seeing the planet Venus in the west and now this planet is putting on brilliant show in the night sky.

Venus has been travelling around its orbit towards us, appearing in evening twilight higher and higher in the sky. Tonight (June 6), the planet reaches its greatest angular distance from the sun, 45 degrees, at what is called "greatest elongation east." Even though we are looking at it in the western sky, it is elongated in the direction of the eastern horizon, so it is east of the sun in astronomical terminology.

As seen in a small telescope, Venus this week appears like a brilliant miniature first quarter moon. However, unlike the moon's pock-marked surface, Venus appears perfectly smooth. That's because we are seeing only the tops of its dense clouds, which mostly appear a featureless blank white. [10 Weird Facts About Venus]

Beneath those bland clouds lies one of the most bizarre of alien worlds: the greenhouse effect gone wild with a terrain of bare rock heated to a uniform world-wide temperature of 864 degrees Fahrenheit (462 degrees Celsius), where the endless clouds rain down sulfuric acid.

There are, in fact, vague shadings in the surface of Venus' clouds. These are best seen with a deep violet filter such as the Wratten 47 available in most telescope stores. It also helps to observe Venus in a daylight sky, when much of its glare is cancelled by daylight.

Whenever Venus is close to elongation, we begin to hear many reports of UFOs in the western sky. Venus is so bright that even experienced stargazers are sometimes taken by surprise.

Over the next few weeks, Venus will begin to move closer to the sun at twilight, actually passing between Earth and sun on Aug. 15.

Most of the planets are so small and far away that they appear as star-like dots in most binoculars. Venus is the exception to this. Study it closely with binoculars over the next few weeks, and you will see it first as a tiny half-moon, then gradually getting larger in size but with a thinner crescent shape as it draws nearer the Earth.

Because Venus’orbit has a slightly different tilt than Earth’s orbit, Venus usually passes above or below the sun, rather than passing directly in front of it. This August it will pass just 8 degrees south of the sun.

Twice so far this century, the orbits of Earth and Venus crossed with both planets in exactly the right position, and Venus was visible in front of the sun. Unfortunately the next such transit of Venus will not occur until the year 2117. I was lucky enough to have clear skies for both the transits of Venus in 2004 and 2012, and seeing the tiny black dot of Venus through a solar filter was a highlight of my observing life.

Editor's note:If you snap an amazing photo of Venus in the night sky and would like to share it with Space.com for a story or gallery, send comments and images in to managing editor Tariq Malik at: spacephotos@space.com.