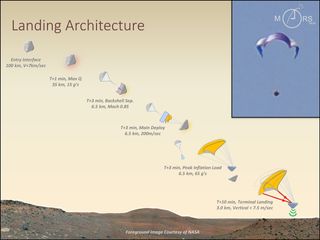 An innovative concept for tiny probes attached to gliders could one day allow small robots to explore intricate locales on Mars that probes never could reach before, scientists say.  '

The project, called MARSDROP, would send two landers to the Red Planet as hitchhikers aboard a larger spacecraft. The landers would then detach and use a steerable parawing to glide the miniature probes (called "microprobes") down to the surface of Mars. '

The wild concept is the brainchild of Rebecca Williams, a senior scientist with the Planetary Science Institute, who collaborated with Matthew Eby from the Aerospace Corporation and a team of engineers led by Robert Staehle at NASA's Jet Propulsion Laboratory in Pasadena, California. [The Best (and Worst) Mars Landings of All Time]'

A prototype version of the MARSDROP re-entry vehicle has already been tested, according to a project description. Using terrain-relative video navigation, scientists could steer microprobes to within tens of meters of a desired landing spot. The probes' small size and precise landing let them explore parts of Mars that larger land rovers like NASA's Curiosity can't reach. That includes Martian canyons, fresh impact-crater sites, volcanic regions and glaciers. '

"What is particularly exciting about this new approach is the possibility of landing in new locations like the canyons in Valles Marineris or at modern geologically active sites such as south-polar geysers or locations with inferred seasonal release of surface water flows," Williams said in a statement. '

The microprobes would carry a suite of instruments — like cameras, weather sensors, seismometers and microscopes that can study minerals and inorganic substances — to gather critical data about the surface of Mars needed before humans can set foot on the planet. The probes could provide scientists with new information about Martian surface geology, monitor surface changes, and search for organics or astrobiologically relevant minerals.  '

"MARSDROP can help lay the groundwork for future human exploration of Mars by characterizing biohazards like Martian dust and assessing the availability of key resources, such as water from which oxygen and rocket propellant can be made," Williams said. '

Another key quality of the MARSDROP mission design is its cost. The concept would only add an estimated 5 percent to the base cost of current Mars missions.'

"MARSDROP is a cost-effective way to double or triple the number of Mars landers for each mission opportunity," PSI representatives wrote in a mission description. '

If MARSDROP is successful, the technology could also be used on planets with atmospheres thicker than Mars, including Venus and Saturn's moon Titan.