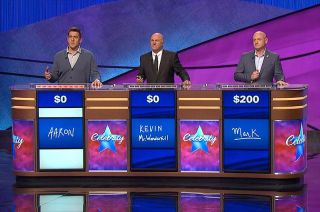 The astronaut who led the second-to-last space shuttle mission placed second-to-first on "Celebrity Jeopardy!," finishing behind a professional football star on Tuesday's show (May 12).

The former astronaut answered questions from categories such as "Traveling Among the Stars" and "'N'-Deavour" — neither of which were about space — but it was "Physical Sciences" that almost tripped up Kelly with one of the two space-related questions the game show presented.

"In 2015, the Dawn spacecraft began orbiting this object in the asteroid belt, the first dwarf planet ever visited," host Alex Trebek queried for $2,000.

"What is Pluto?" O'Leary replied, incorrectly, as the first to buzz to in.

"That is what I was going to say," Kelly promptly quipped, eliciting laughter from the studio audience.

The correct answer was Ceres.

Kelly fared better with another planetary question earlier in the game.

"This planet comes within 25 million miles of Earth, the closest of any planet," Trebek stated.

All three contestants missed the last question under the category of "Business." The players were shown photos of two men standing beside motorcycles and were asked to name the two early 20th century business leaders.

Kelly wrote down "Ford and Pontiac," wagering half of his money. O'Leary chose "the Wright Brothers," and Rodgers guessed "Ernst and Young."

The correct answer was Harley and Davidson.

Finishing in second, Kelly earned $10,000 for a charity of his choice.

"I am playing for Memorial Hermann Hospital in Houston, Texas, which is the hospital where Gabby stayed in for six months after she was nearly assassinated," Kelly said.

Gabby Giffords, the former congresswoman from Arizona, was in the studio audience cheering her husband on.

Trebek pointed out that another of Kelly's family members was in his corner, though a bit farther away.

"A couple of hundred miles up is your twin brother, Scott, on the International Space Station," Trebek said. "And he may be watching — if his antenna is long enough."