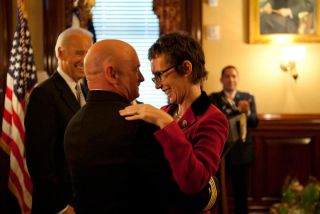 Kelly, a Navy captain,officially retired from NASA and the Navy on Oct. 1 after 25 years of service. On Thursday he received the Legion of Merit award from Biden. Giffords, who was shot in the head during a mass shooting in Tucson earlier this year, pinned another award, the Distinguished Flying Cross, on her husband, according to the Associated Press.

"Gabby did it better than I did," Biden said, according to the AP.

A NASA photo showed Kelly shaking hands with Biden during the event. Other photos of the event posted to Giffords' official Facebook page show a beaming Kelly dancing with his wife and speaking from a podium. [Astronaut & the Congresswoman: Photos of Kelly and Giffords]

"You make me jealous of your true grit," Kelly said during the event, according to Giffords' Twitter updates. "There must be something in that Arizona water."

Democratic leader Nancy Pelosi was among those who attended Kelly's retirement ceremony at the Secretary of War Suite of the Eisenhower Executive Office Building in Washington.

Kelly and Giffords, D-Ariz., entered the media spotlight on Jan. 8 when Giffords was shot in the head while attending a public event in Arizona. Six people were killed and 13 injured, including Giffords, in the attack.

Giffords recovered in time to watch Kelly launch into space in May on NASA's STS-134 flight. Kelly commanded the final flight of the space shuttle Endeavour during the mission, which delivered a $2 billion astrophysics experiment to the International Space Station.

During Kelly's shuttle flight, Giffords underwent cranioplasty surgery to have a piece of her skull replaced with a ceramic implant, which will eventually be covered by bone.

"You've been an inspiration, an inspiration to thousands of people who suffer from traumatic head injuries," Biden said, according to AP. "People look at you and say, 'I can make it. I can do this,'"

Kelly, 47, is a native of West Orange, NJ, and a veteran of four NASA space shuttle flights. He joined NASA's astronaut corps in 1996. He entered the Navy as an aviator in 1987 and flew 39 combat missions during Operation Desert Storm.

Kelly has an identical twin brother, Scott Kelly, who is also a NASA astronaut and Navy captain. Scott Kelly was serving as commander of the International Space Station when his sister-in-law Giffords was shot.

Scott Kelly returned to Earth in March and remains active with NASA's astronaut corps and the Navy.