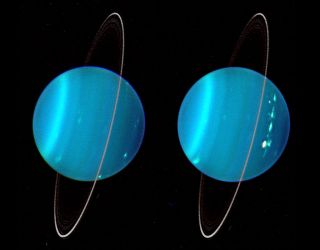 When talking about the planet Uranus, it's easy to crack jokes (ahem) about how its name is pronounced. But does the laughter put the planet at a disadvantage in terms of public interest?  Space enthusiast and science communicator Ariel Waldman argues that when people can't stop giggling at the name of the seventh planet from the sun, it might also stop them from actually learning anything about it.

"Uranus is actually a really cool planet and it's completely the underdog of our solar system," Waldman argues in a new YouTube video. "Because people always make jokes around it […] it might mean people avoid learning anything about the planet at all because they can't get around the giggle factor."

Photos of Uranus that show a smooth, seemingly featureless exterior also work against the public's potential interest, Waldman said. The planet doesn't have craters like the rocky planets, and in many images it doesn't appear to have the beautiful stripes that are so apparent on Jupiter and Saturn.

"This is just so heartbreaking," said Waldman, because in reality Uranus is "really frickin' cool."

Waldman delivered her argument in a video for the TMRO Space Pod video series.

Contrary to what some images show, Uranus does have stripes like Jupiter (they become visible in different wavelengths of light). Other cool facts about this gas giant include that it has 27 moons; it orbits on its side, likely because of a collision with another planet; it has a ring system; it has the coldest temperatures of any planet in the solar system (including Neptune and Pluto that orbit farther away from the sun), with lows reaching minus 435 degrees Fahrenheit (minus 224 degrees Celsius); and it has intense storms, which have been observed recently on its surface   but scientists don't know how or why they form.

Do these facts get overlooked because of the snickers that so often precede an introduction to Uranus? Perhaps it's time we all got over our case of the giggles and took this planet a bit more seriously. Or at least subdue our laughing long enough to learn a few things about Uranus, which is large and contains lots of gas.