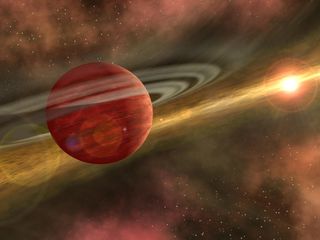 This artist's image shows a newly formed planet swimming through the protoplanetary disk of gas and dust surrounding its parent star. Scientists are investigating how tiny clusters of material contributed to planet formation.
(Image: © NASA/ JPL-Caltech)

Clumps of small, glassy particles may be responsible for the formation of giant asteroids and the planetary "embryos" that collided to form rocky planets like Earth, a new study suggests.

Asteroid fragments that fall to Earth as meteorites often contain tiny, round pellets known as chondrules that formed when molten droplets quickly cooled in outer space during the solar system's early years. Chondrules are found in 92 percent of all meteorites.

After the sun was born, the rest of the solar system emerged from a giant rotating cloud of gas and dust known as the protoplanetary disk. The researchers found that, as chondrules moved through gas in this disk, the friction between the particles and the gas slowed down the chondrules, allowing them to cluster.

The researchers calculated that the largest of these clusters of particles could gather enough chondrules within about 3 million years to grow into planetary embryos, the moon- to planet-sized chunks of rock that careened around the solar system before planetary formation finished in the solar system.

"The asteroids did not stop growing when they reached the size of Ceres, which is the largest asteroid in the current asteroid belt," said study lead author Anders Johansen, an astrophysicist at Lund University in Sweden. "Rather, the largest bodies grew to [be] the same size as Mars."

These planetary embryos might have collided in giant impacts over 30 million to 100 million years to form the rocky planets and moons present in the solar system today, the researchers said.

"The implication is that chondrules may not only have been responsible for the growth of asteroids, but also for the formation of terrestrial planets," Johansen told Space.com. "Mars may be a remnant embryo that avoided being incorporated into a larger planet like Earth or Venus."

The scientists detailed their findings online April 17 in the journal Science Advances.