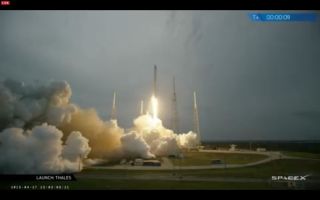 This screenshot from a webcast shows SpaceX's Falcon 9 rocket blasting off on April 27, 2015, carrying the first-ever satellite for the Central Asian nation of Turkmenistan.
(Image: © SpaceX)

The SpaceX Falcon 9 rocket blasted off from Florida's Cape Canaveral Air Force Station at 7:03 p.m. EDT (2303 GMT) to deliver the TurkmenÄlem52E/MonacoSat communications satellite into orbit, after a 49-minute delay caused by cloudy conditions.

The satellite, which was built by France-based aerospace firm Thales Alenia Space, weighs about 9,920 lbs. (4,500 kilograms) and has a design lifetime of 15 years, according to a mission description. The spacecraft will be operated by the Turkmenistan Ministry of Communications and has a coverage area that includes Europe, Central Asia and Africa.

That April 14 launch also featured a rocket-reusability test, in which the Falcon 9's first stage attempted to land on an unmanned "spaceport drone ship" in the Atlantic Ocean. The rocket stage managed to hit the boat but toppled over on the deck and exploded. The landing attempt failed because of an issue with the stage's throttle valve, Musk has said.

SpaceX did not attempt a landing on the drone ship during Monday's launch. The next attempt will come on the next Dragon cargo launch, which is currently scheduled for June 19. (SpaceX holds a $1.6 billion contract with NASA to fly at least 12 resupply missions to the space station; the April 14 liftoff kicked off cargo run number six.)

The landing maneuvers are part of SpaceX's internal effort to develop fully and rapidly reusable rockets, a breakthrough that Musk has said would dramatically cut the cost of spaceflight.