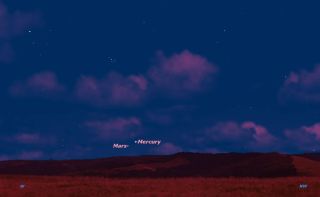 On Wednesday evening, April 22, Mars and Mercury will be about a degree apart.
(Image: © Starry Night Software)

There are two interesting but challenging events in the night sky this week: a close conjunction of the two smallest planets, and a chance to observe at least one asteroid close to the moon.

Tonight (April 22), about half an hour after sunset, there is a chance to observe the two smallest planets, Mercury and Mars, shining close to each other. Weather permitting, the planets will appear about a degree from each other, about one-tenth the width of your closed fist held out at arm's length.

Mercury is always a challenge to observe because, although quite bright, it never strays far from the sun. I've found that the best time to spot it is about half an hour after sunset or half an hour before sunrise. Any earlier or later either the background sky is too bright, or Mercury is too close to the horizon. I also find 7x50 or 10x50 binoculars helpful in seeing this tiny speck of light against the twilight sky, although once I locate it in binoculars I can usually spot it with my unaided eyes. [Astronomy Guide: Tools and Gear to Get Started]

This evening, Mercury will be joined by Mars, which is heading behind the sun towards conjunction on June 14. Because Mars is on the far side of the sun, it is now more than two magnitudes fainter than Mercury. Look for it in binoculars just to the left of Mercury, and slightly closer to the horizon.

In a telescope you should be able to see both planets in the same low-power field, though both disks will be extremely small. Mercury is 5.7 arc seconds in diameter and Mars only 3.8 arc seconds. There are 60 arc seconds in an arc minute, 60 arc minutes in a degree, and 360 degrees in a circle.

This will probably be your last chance to see Mars before it reappears in the morning sky in late August.

The other event this week is a close pass by the moon just south of the asteroid Juno, which occurs late on Saturday night (April 25) or rather, early Sunday morning (April 26) just as the first quarter moon is setting. Like all the asteroids, Juno will appear no different than a 9th magnitude star, so you will need optical aid and a detailed chart to see it in the night sky.

I particularly like the strange and exotic names which have been given to asteroids. All the ones in the chart are relatively old discoveries, dating from the 19th century, and all but one have the names of minor figures in mythology.

Juno is the only one of the asteroids in the chart visible in binoculars. All the rest are 11th magnitude or fainter. Except for Juno and Bamberga, which are both about 145 miles (235 km.) in diameter, the rest are much smaller in size, ranging from Nemesis, which is 117 miles (188 km.) in diameter, to tiny Lucia, only 34 miles (55 km.) across.

Editor's note: If you see Mercury and Mars together in the night sky let us know. Send us photos and comments for a possible story or gallery at: spacephotos@space.com.

This article was provided to Space.com by Simulation Curriculum, the leader in space science curriculum solutions and the makers of Starry Night and SkySafari. Follow Starry Night on Twitter @StarryNightEdu. Follow us @Spacedotcom, Facebook and Google+. Original article on Space.com