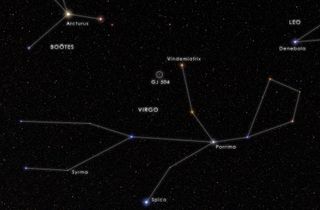 Now is a good time to spot the constellation Virgo in the southern and southeast skies.
(Image: © NASA's Goddard Space Flight Center/NOAJ)

This week, during the late evening hours, the second-largest of all the constellations — Virgo, the Virgin — occupies our southern and southeast sky.

Right now is a good time to look for Virgo, since the bright moon is not lighting up the night sky. (Virgo may be very large, but most of her stars are rather dim.)

It's interesting to note that although Virgo is not a terribly obvious star pattern, almost every culture represents this grouping as a female figure, often carrying an ear of corn or a sheaf of wheat. In fact, Virgo was identified with practically every goddess who had any relation to the Earth. [Best Night Sky Events of April 2015 (Stargazing Maps)]

R.H. Allen, author of the influential 1899 book "Star Names: Their Lore and Meaning," noted the antiquity of this figure, stating, "She is the oldest purely allegorical representation of innocence and virtue."

And yet, unlike most of the ancient constellations, Virgo presents no distinctive pattern of stars to attract attention. Her head is supposedly marked by the faint star Zavijava; her feet are marked by Mu and the unlettered star 109. Her right arm extends from Porrima to Vindemiatrix (Latin for "grape gatherer"). Her right hand is usually depicted carrying a staff.

It's perhaps easier to envision Vindemiatrix as Virgo's head, with a shawl, marked by the stars Porrima and Zaniah, draped over her shoulders. In the old allegorical star books, the goddess holds some spikes of wheat in her left hand, and her brightest star, Spica, glows in one of the ears of grain held near her belt.

Spica is the 16th-brightest star in the night sky, a brilliant object about eight times larger and 2,290 times more luminous than the sun. It also has a smaller companion first detected spectroscopically in 1890.

To find Spica, all one has to do is locate the Big Dipper, which stands almost directly overhead and high above the northern horizon in the late evening. Follow the sweep of the Dipper's handle, away from the bowl. This will take you to a brilliant yellow-orange star, Arcturus, in the constellation of Boötes, the Herdsman.

Now continue along that curve southward, and the next bright star that you'll come to, shining with a distinct bluish tint, will be Spica. There is an old mnemonic phrase: "Make an arc to Arcturus . . . then speed to Spica." And indeed, the same arc continued from the end of the Dipper's handle and extended past Arcturus for about the same distance will come to Spica.

Viewers in suburban and rural locations, benefiting from darker skies, will be able to see a striking four-sided star pattern to the lower right of Spica that resembles the mainsail of an Oriental junk, though it's better known as Corvus, the Crow. The positioning of the Crow relative to Spica might give one the impression that the bird is getting ready to grab some of those spikes of wheat in Virgo's hands.

In his classic star guide "The Stars: A New Way to See Them" (Houghton Mifflin, 1952), H.A. Rey suggested an alternative way to visualize Virgo: lying down in a supine position. Rey refers to Spica as Virgo's brightest jewel but says that she carries that jewel "on an unusual spot." That spot? Her derrière.

Looking back in time

Spica is 260 light-years away, which means that observers on Earth are now seeing light from the star that started on its journey to Earth in 1755.

That was the year of the French and Indian War, when British troops and colonial militiamen were ambushed and suffered a devastating defeat inflicted by French and Indian forces. During the battle, British Gen. Edward Braddock was mortally wounded. Meanwhile, a colonel by the name of George Washington survived.

Also located within Virgo is one of the most remarkable areas of the heavens, known as the Virgo Cluster of galaxies. Many of the galaxies in the Virgo cluster are between 40 million and 70 million light-years away, meaning that in some cases their light began the journey toward Earth around the time that dinosaurs roamed the Earth.

The Virgo Cluster is a celestial wonderland of star cities numbering in the thousands. The probable total figures are staggering considering that astronomers think each of those cities, or each galaxy, contains on average perhaps 200 billion stars!