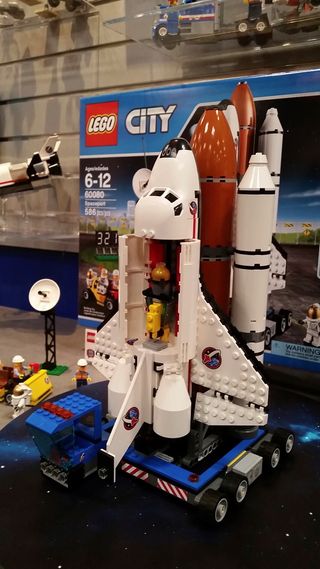 LEGO is set to release this spaceport set (complete with a space shuttle) in August 2015 as part of the company's city line.
(Image: © Space.com/Tariq Malik)

Have you ever wanted to build your own space shuttle? Now, thanks to LEGO, you're going to get the chance, years after the end of NASA's shuttle program.

LEGO is set to release a new series of sets all based around the idea of flying to space. The four LEGO City sets are scheduled for release in August 2015, and will have a variety of different spacecraft any space fan can build. You can get a detailed look at all of the space-themed LEGO City sets in a video from Space.com.

"We haven't had a space-specific theme in quite some time, so [we're] excited to have some shuttles back this year," LEGO Brand Manager Amanda Santoro said in the video. The sets range in price from about $10 to about $120 for the largest shuttle set, she added.

The smallest set includes astronauts, scientists and a small rover. One of the more mid-range sets includes a spaceplane, astronauts and a satellite, but serious space and LEGO fanatics will probably want to splurge for the $119.99 spaceport. The spaceport comes complete with a crawler transporter for the large, buildable space shuttle. The shuttle's payload bay doors even open to reveal a space to hold satellites, like NASA's shuttle.

The new space shuttle sets are just the next in a long line of space-themed toys from LEGO. The company released an adorable alien and dog set in January, and followed it up with a minature space shuttle in February.  Last year, the company released a buildable version of NASA's Mars rover Curiosity, which is currently exploring the Martian surface. And earlier this year, LEGO fans submitted a version of the Hubble Space Telescope via LEGO Ideas. Unfortunately, LEGO passed on the venerable space telescope this year.

If you can't wait until August to get your hands on a new LEGO spaceship, the toy company is featuring a tiny UFO as its April minibuild.