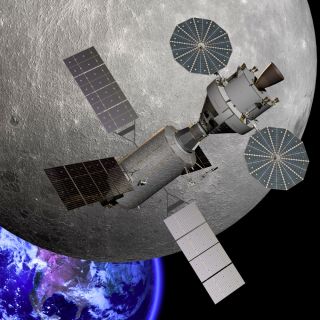 This artist's illustration shows NASA's Orion capsule near the far side of the moon.
(Image: © Lockheed Martin)

NASA has funded the development of a dozen new technologies that could help humanity extend its footprint out into the solar system.

The awards, which were granted via a program called Next Space Technologies for Exploration Partnerships (NextSTEP), set up NASA partnerships with 10 aerospace companies and one public university to develop tech in three different areas: advanced electric propulsion, human habitation and small satellites. (One of the companies, Lockheed Martin Space Systems, received awards for two different technologies.)

"Commercial partners were selected for their technical ability to mature key technologies and their commitment to the potential applications both for government and private-sector uses," William Gerstenmaier, associate administrator for Human Exploration and Operations at NASA Headquarters, said in a statement. "This work ultimately will inform the strategy to move human presence further into the solar system." [Future Visions of Human Spaceflight (Gallery)]

The propulsion grants are worth $400,000 to $3.5 million per year per award for up to three years of work, NASA officials said. Three companies received awards: Texas-based Ad Astra Rocket Company; Aerojet Rocketdyne of Redmond, Washington; and MSNW LLC, which is also based in Redmond.

Ad Astra is probably best known for its VASIMR propulsion system, which is still in development. MNSW is working on a nuclear-fusion rocket in addition to its own electric-propulsion system.

The NextSTEP habitat projects aim to help develop modules to augment NASA's Orion space capsule, which is being designed to support a crew of four astronauts for three weeks in deep space. NASA wants these additional systems to boost that capability to 60 days in Earth-moon space, with the potential for scaling up for a mission to Mars.

Awardees in this field get $400,000 to $1 million for up to 12 months of work, NASA officials said. The selected companies are:

The small-satellite grants intend to encourage the development of cubesat missions for possible inclusion on the first flight of NASA's Space Launch System (SLS) rocket in 2018. These contracts are worth $1.4 million to $7.9 million each, NASA officials said. Awardees are Lockheed Martin Space Systems and Morehead State University, which is located in Kentucky.

NASA is developing SLS to help get astronauts to deep-space destinations. The rocket's first flight, known as Exploration Mission-1, is slated to launch an unmanned Orion on a journey around the moon and back.