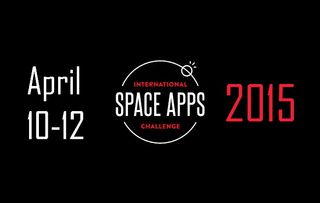 The power of the people is being applied to space science this month: The fourth-annual International Space Apps Challenge will let citizen scientists all over the world come up with new and creative ways to use data from space.

Information collected by space probes and other space-agency instruments can be used to help expand humanity's knowledge of the cosmos, or to make life a little better here on Earth. Doing so requires not only collecting the data, but also knowing what to do with it. The 2015 International Space Apps Challenge engages nonscientists in this pursuit.

"There's this huge mass of people all around the world who are incredible fans of NASA and space in general," said Sean Herron, a technologist and developer who was a member of the original NASA team that started the International Space Apps Challenge. Herron said that for years, he and his colleagues had seen citizen scientists create their own projects using NASA data, and they wanted to find a way to "tap all of this genius and bring them together, and have one big event to try and solve what we call 'problems of a global nature.'"

The International Space Apps Challenge is the result of that desire. It is open to anyone on Earth who has access to an Internet connection. Participants do not need to have any minimum knowledge level in any area, including science and coding.

Participants can work in teams or alone, and are tasked with creating a product by the end of the two-day period.

The products can be totally original ideas, or they can be in response to one of NASA's 35 suggested challenges. These challenges fall into four categories: Earth studies, space exploration, human health research, and robotics.

Examples of suggested challenges in the space exploration category include "3-2-1 Liftoff: Launch That Rocket!" in which designers are asked to "develop an experience that captures all the variables involved with making the launch decision."

"Visualize the Asteroid Skies" is a challenge in which participants are asked to "create data aggregators and visualizations of asteroid data in meaningful ways that can educate the public about the need to explore asteroids and protect the Earth from them."

Past entries have tackled a wide range of topics, from climate change to the International Space Station. To complete the challenge, participants will have access to more than 200 data sources, according to NASA.

Apps Challenge entrants can participate remotely or attend one of the live events taking place in more than 100 cities worldwide, covering every continent except Antarctica.

"The exploration of space is, by necessity, a unified international effort — and diversity of experience and perspective inevitably produces a better product," the event website reads.

There are awards for the top technologies, including "Best Use of Data," "Galactic Impact" and "People's Choice." According to the event website, winners of the global awards will have the opportunity to attend a NASA launch.

This year's Challenge will include a "Data Bootcamp," which is open to the public and will help participants improve their coding and data-handling skills. The boot camp will be live streamed online from the Space Apps "Global Mainstage," and has a "focus on Women in Data," according to a NASA statement.

At the event's New York City location, astronaut Cady Coleman and NASA Chief Scientist Ellen Stofan will be on hand to work with STEM students who are participating.

According to the event website, "The idea of a Challenge is so compelling because it acknowledges the fact that the world is facing serious challenges — and that we all have to work together to approach them."