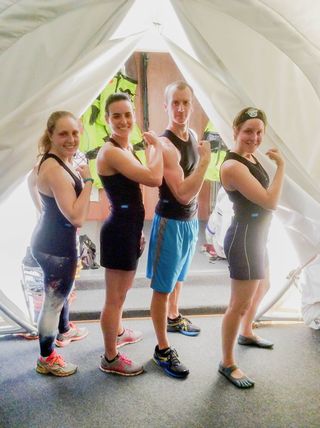 An astronaut "smart shirt" — one that could someday beam biometric information back to ground controllers to keep an eye on a spacefarer's health — is now on a space mission of sorts.

The crew now conducting a mock Mars mission at the Hawaii Space Exploration Analog and Simulation (HI-SEAS) facility uses Hexoskin frequently to look at how well crewmembers are coping in the harsh, high-altitude environment.

"Crewmembers have used Hexoskin to track performance in EVAs [extravehicular activities] while exploring the geology of the surrounding volcanic terrain … During EVAs and workouts, crewmembers monitor heart and respiratory rates on their Hexoskin applications and applaud each other for reaching new maximum levels," HI-SEAS chief scientist Jocelyn Dunn told Space.com via email. [See photos of the HI-SEAS mission]

"While living in the confinement of the HI-SEAS dome, the crew improves their physical health with workouts ranging from yoga to plyometrics to resistance-band strength training to kickboxing to cardio workouts on the treadmill and stationary bike," Dunn added. "Most of the crew feels that we are in better physical health now compared to before the mission."

Hexoskin is the commercial version of a prototype shirt called Astroskin, which was tested last year during a 45-day mission in Antarctica. The Canadian Space Agency (CSA) hopes to fly a version of this shirt in space, although a flight date has not been set.

Montreal-based Hexoskin has been expanding its line of products in the past year, including shirts tailored for winter activities and a new line aimed at attracting teenagers. The data for Hexoskin can be downloaded to various types of software, CEO Pierre-Alexandre Fournier told Space.com.

In addition to its possible space applications, the technology has been touted as a tool to help monitor the health of residents in remote communities. This is especially relevant in Canada, where many thousands of residents live in northern, rural areas.

Hexoskin and the CSA are also looking at how the health of seniors relates to the health of astronauts, as many effects of aging are observed in orbit: bone loss, muscle weakness and blood-flow changes, to name a few. Fournier said 100 groups in 12 countries are doing health research with Hexoskin.

Hexoskin does not disclose detailed revenue figures, but Fournier said the company is growing in terms of revenues, employees and distributors.

There are 25 employees, all in Montreal. Most revenue comes from consumer purchases, but Hexoskin also has customers in the government and in public/private research institutions. When asked about plans for next year, Fournier said development would be based on customer demand.

"What's important for us this year is to keep the conversation going between our community and the development team to make sure that we improve the product in the direction that people want, because we are really here to serve the community," Fournier said.

HI-SEAS will be a help to Hexoskin generally because "there have been very few missions that lasted that long to simulate extraterrestrial environments," he added. The crewmembers began their eight-month mission in mid-October 2014; it's scheduled to end in June.

Fournier also said he is an advocate of manned Mars exploration, adding he believes it will happen "sometime during our lifetime."