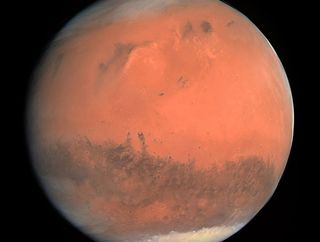 A mission to Mars could take a toll on astronauts' bodies, including their eyes.
(Image: © ESA)

The National Space Biomedical Research Institute (NSBRI) Industry Forum earlier this month funded three companies as part of its "Vision for Mars" challenge, which seeks to encourage the development of tech that can mitigate the visual problems astronauts experience during long-term spaceflight.

The Vision for Mars winners are Annidis Inc. and its retina-imaging ophthalmoscope; Equinox, which is developing a pair of pressure-regulating goggles; and Web Vision Centers Group, which aims to manufacture glasses with lenses that can be swapped out easily to accommodate a changing prescription. [The Human Body in Space: 6 Weird Facts]

Long-term exposure to a reduced-gravity environment can take a toll on the human body. For example, astronauts aboard the International Space Station must exercise vigorously every day to stave off muscle atrophy and a decrease in bone density.

In recent years, doctors have begun to realize that lots of time in space can lead to serious eye problemsas well. While the causes are still under investigation, many researchers think the issues result primarily from an increase in pressure inside the skull (which happens because cerebrospinal fluid flows into the head more in space than it does on Earth, where it's pulled down by gravity).

Such health issues are a real concern for NASA and other groups that aim to send astronauts to Mars, since a journey to the Red Planet and back would require at least 12 months of spaceflight. To get a better handle on just what rigors a Mars expedition could impose, NASA astronaut Scott Kelly and Russian cosmonaut Mikhail Kornienko will launch Friday (March 27) on the first-ever yearlong mission to the International Space Station.

The tech selected by the Vision for Mars challenge could also help humanity get ready to head for the Red Planet, contest organizers said.

The ophthalmoscope, for example, should be able to image the retina in fine detail without the need for invasive procedures, while the goggles are designed to stabilize pressure within the eye. And the lens-swapping glasses could help astronauts adjust when their eyes change shape in microgravity, causing their visual acuity to change as well.

These devices should find applications here on Earth as well, Vision for Mars representatives said. The prescription-changing glasses are well-suited for children, whose eyesight shifts over time. And the goggles have similarly high spinoff potential.

"The Equinox device has the potential to provide a non-invasive method to treat eye problems affecting astronauts on prolonged space missions," ophthalmologist Steven Schallhorn, a member of the Vision for Mars advisory team, said in a statement. "But the spinoff of this technology is even more exciting: it could represent a therapeutic option for patients suffering from glaucoma."