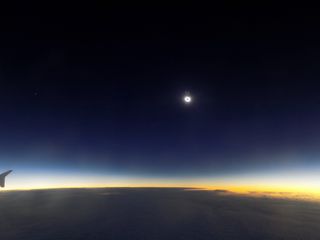 The total solar eclipse of 2015 shines at its best in this amazing view captured by Space.com skywatching columnist Joe Rao from an eclipse-chasing jet over the North Atlantic Ocean on March 20, 2015.
(Image: © Joe Rao/Space.com)

ABOARD A JET ABOVE THE NORTH ATLANTIC OCEAN – A total eclipse of the sun on Friday (March 20) thrilled skywatchers across Europe, Africa and Asia where it was visible, but nowhere was the view as perfect as  aboard a chartered jet soaring over the top of the world.

Thanks to the German air charter companies AirEvents/Deutsche Polarflug and Eclipse-Reisen, 132 observers from around the world — including this writer — watched the total solar eclipse of 2015 from an airborne jet in what was truly a magnificent sight.

The eclipse watchers, dubbed "umbraphiles" (after the umbra, the dark shadow cone of the moon that rapidly sweeps across the surface of the Earth) flew in two charted aircraft to specifically selected points along the path of totality, situated roughly between the Norwegian Sea and the North Atlantic Ocean, approximately halfway between Norway and Iceland, about 200 miles (320 kilometers) north-northwest of mainland Scotland. [See amazing photos of 2015 total solar eclipse]

Beyond their scientific and aesthetic interest, total solar eclipses in recent years have become special events with considerable economic impact. Convenient worldwide travel has led to a fraternity of dedicated eclipse chasers who will travel literally anywhere to add a few precious moments of time that they have spent "basking in the shadow of the moon." Indeed, some had paid as much as $8,500 for a window seat on these flights.

Our contingent of eclipse watchers began their adventure from Dusseldorf, Germany. The two aircraft employed were an Airbus A320-200 and a Boeing 737-200, both belonging to the carrier Air Berlin. Dr. Glenn Schneider, from the University of Arizona's Steward Observatory, who was on hand in the latter aircraft for his 32nd total solar eclipse, worked out the flight plans for both flights as well as a third eclipse flight that emanated out of Zurich, Switzerland, to rendezvous with the moon's shadow.

Racing the moon's shadow like paparazzi scrambling alongside a celebrity's passing automobile – a race they would ultimately lose — both aircraft traveling at 520 mph (837 km/h) were still able to lengthen the view of totality by nearly a minute and provide 225 seconds of total eclipse for passengers to take pictures and record other data. In contrast, persons on a hypothetical stationary ship on the open waters below would have seen — provided no clouds blocked the view — the moon's 287-mile-wide shadow (462 km) speed past them at nearly 2,000 mph (3,219 km/h), providing a noticeably shorter total eclipse lasting 167 seconds.

Although for the airborne participants, this morning's amazing sight lasted less than 4 minutes, the fantastically beautiful skyscape more than repaid us all, many of who were already up before dawn to ready themselves for a round-trip flight that would cover nearly 2,000 miles and take almost 5.5 hours.

A gray and gloomy start

The day in Dusseldorf started under cloudy and misty conditions. On the Airbus A320-200, which I was on, we actually got off nearly 6 minutes late, but we quickly broke through the scud, made up the lost time, and soon were on our way for our rendezvous with the lunar shadow. Under the direction of Capt. Wilhelm Heinz and First Officer Dirk Pleimling, and following Schneider's flight plan, we arrived at that special point on an aviator's chart where we were intercepted by the moon's dark shadow precisely on time. [Watch video of the 2015 total solar eclipse from space]

At the moment the last of the sun's rays winked out behind the moon's dark silhouette, it was 18 degrees above the southeast horizon (your clenched fist held at arm's length measures 10 degrees) in a deep blue sky. Below our jet was a nearly solid deck of clouds.

Interestingly, thanks to the flight trajectory of both aircraft out of Dusseldorf, passengers initially were only able to catch fleeting glimpses of the sun — or no sun at all. The reason was that the sun was situated almost directly behind the planes, mostly precluding us from getting a good view of the promised sky show.

Even though we all knew about an hour after departing Germany that the eclipse was underway, a few joked about whether the long-awaited celestial event was actually happening. "Are they sure this is the right day?" one passenger joked. But in time, as the eclipse slowly progressed and more and more of the sun was being blocked out, many were able to perceive that the skylight outside our windows was slowly getting dimmer. [How Solar Eclipses Work (Infographic)]

The biggest advantage of an eclipse flight is that a view of the totally eclipsed sun is virtually guaranteed. In this case, flying high above the usually tempestuous weather conditions that predominate northernmost Europe and the Arctic, any worries of encountering cloud cover were allayed. Both jets surmounted more than 75 percent of the atmosphere (in terms of mass) and almost all of its water vapor below, providing an opportunity to observe, first-hand, what happens in the Earth's upper atmosphere when the light of the sun is suddenly switched off.

In dramatic fashion just a few minutes before totality, the light inside our cabin began to rapidly fade away, much in the same manner as lights in a theater dim before the start of a show.

As the last of the sun's rays slipped behind the jagged lunar edge, it produced a beautiful and long-lasting "Diamond Ring" effect; to the eye the "diamond" resembled a dazzling magnesium flare, shining with a gleaming silvery white light. The dark lunar shadow then swept in from the west and enveloped the plane in an eerie darkness. Because this moon passed through perigee (its closest point to the Earth) 14 hours before new moon, the shadow that it cast on Earth was unusually large, measuring 287 miles wide by 93 miles long (462 km by 150 km); a tremendous "oval of darkness."

The sun's beautiful corona heralded the beginning of the total phase. Of the 10 total eclipses I've seen, this corona was by far the most brilliant, shining like a globular platinum ring around the moon's black disk; a textbook corona you would see near peak sunspot activity. Adding to this scene was Venus, which shone well off to the east (left) of the sun. Meanwhile, the horizon glowed with the colors of a weird, out-of- place sunset (it was, after all, only 9:41 in the morning).

Total solar eclipses seem to have a perverse habit of being visible from regions of the Earth where the population is small, as well as remote parts of the Earth or out over wide stretches of open ocean water, and this eclipse was no exception. The total number of people who likely experienced the complete darkening of the sun this morning could have all fit into Dodger Stadium with room to spare.  The only places where the moon's umbra touched land were the Faroe Islands (pop. 50,000) and Svalbard (pop. 2,600).

The latter is a Norwegian archipelago in the Arctic Ocean located about midway between continental Norway and the North Pole. In spite of rather poor weather prospects and a warning to watch out for polar bears (which outnumber the local inhabitants), this did not deter more than 1,500 eclipse watchers to journey there in hopes of getting no more than a 2.5-minute glimpse of the darkened sun.

First reports indicated that totality was visible from the Faroes through breaks in rain clouds. Svalbard had variable conditions ranging from crystal-clear skies to clouds, sleet and rain. The path of the total eclipse finally came to an end just short of the North Pole.

The next total solar eclipse will occur in less than year on March 9, 2016, and will sweep over Sumatra, Borneo and Sulawesi (all with poor weather prospects).But on Aug. 21, 2017 -- for the first time in nearly four decades — it will be the turn of the contiguous United States to play host to this, the greatest of celestial road shows, with millions of people fortuitously placed within a 70-mile-wide (113 km) totality path that will stretch from Oregon to South Carolina.

Make your plans now and mark your calendars!