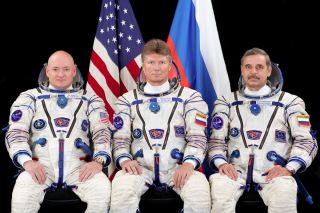 NASA astronaut Scott Kelly and cosmonauts Gennady Padalka and Mikhail Kornienko (L to R) are due to launch to the International Space Station on March 27. Kelly and Kornienko will remain on the station for one year.
(Image: © Roscosmos/GCTC)

An American astronaut and two cosmonauts are set to fly up to the International Space Station Friday (March 27), and two of those crewmembers won't be back on Earth for about a year on a mission that aims to help open the doorway to deep space for Earthlings.

NASA astronaut Scott Kelly and cosmonaut Mikhail Kornienko are due to launch on their yearlong mission to the space station on Russian Soyuz spacecraft from the Baikonur Cosmodrome in Kazakhstan with cosmonaut Gennady Padalka. Kelly and Kornienko's mission will mark the first yearlong mission aboard the station, and the first time an American has spent a continuous year in space.

"Kelly and Kornienko will spend a year on the space station to better understand how the human body reacts and adapts to the harsh environment of space," NASA officials said in a statement. "Data from the expedition will be used to determine whether there are ways to further reduce the risks on future long-duration missions to an asteroid and eventually Mars." [Most Extreme Human Spaceflight Records]

Padalka will return to Earth after about six months, before Kornienko and Kelly. Padalka will serve as commander on the station when it plays host to four people, and he is expected to break the record for most cumulative time spent in orbit during this spaceflight, according to NASA.

Once the Soyuz launches to space at 3:42 p.m. EDT (1942 GMT), it should take about six hours to link up with the space station. You can watch the launch and docking live on Space.com via NASA TV starting at 2:30 p.m. EDT (1830 GMT) on March 27, when it's early in the morning on March 28 at the Baikonur Cosmodrome.

NASA officials hope that this yearlong mission will help them gather valuable data about how the human body behaves after a year in space. This kind of information is important because it can help protect astronauts sent on long voyages to Mars or other deep space destinations in the future.

"We know a lot about six months, but we know almost nothing about what happens between six and 12 months in space," Julie Robinson, a space station program scientist said during a news conference earlier this year. Kelly's twin brother and former NASA astronaut Mark Kelly will also participate in experiments on the ground so that officials can compare the way the two brothers differ.

Padalka, Kornienko and Kelly will join NASA's Terry Virts, the European Space Agency's Samantha Cristoforetti and cosmonaut Anton Shkaplerov when they reach the station. The $100 billion orbiting outpost has been continuously occupied by rotating crews of cosmonauts and astronauts since 2000.