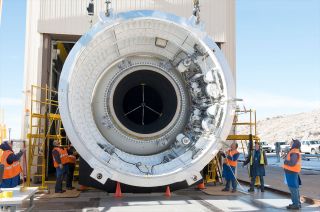 When the world's largest solid rocket motor is ignited in Utah this week, it will not leave the ground, but it will fire with components that have a long spaceflight history.

The static fire on Wednesday (March 11) at Orbital ATK's facilities in Promontory, Utah, will mark the fifth test of an advanced, five-segment booster and the first of two such firings planned in support of NASA's new heavy-lift rocket, the Space Launch System (SLS). The agency intends to use a pair of the 177-foot-long (54 meter) solid-fuel motors to power the SLS beginning with its first flight in 2018.

From its external appearance, the SLS motor resembles the solid rocket boosters (SRBs) used to launch NASA's space shuttle orbiters, only longer. In order to produce the increased thrust needed to loft the much larger rocket, the SLS motor has been extended, lengthening the booster from four to five segments. [NASA's Space Launch System in Pictures]

The individual segments though, use the same case parts that were recovered and reused during the space shuttle program. As such, the first SLS qualification motor (QM-1) being tested on Wednesday is comprised of hardware with a historic past.

Lifting off on July 29, 1985, the cylinder — now configured as part of the second segment on QM-1 — flew for the first 2 minutes of the STS-51F mission. The flight carried the Spacelab 2 laboratory, but may be best remembered for extending the "cola wars" into space: both Coca-Cola and Pepsi flew experimental soda cans for a zero-g taste test.

At the opposite end of the timeline, QM-1 is topped by a forward dome flown on the final shuttle mission, STS-135. The dome lifted off atop Atlantis' right booster, capping the last launch for the winged orbiter fleet.

In total, the SLS test motor is comprised of cylinders and domes flown on 23 different space shuttle missions. Other notable flights include: STS-88, the first crewed mission to assemble the International Space Station in 1998; STS-114, NASA's 2005 return to flight after the loss of shuttle Columbia 2 years earlier; and STS-125, the fifth and final Hubble Space Telescope servicing mission.

The QM-1 hardware also includes casings used during the three previous five-segment tests between 2009 and 2011, as well as seven other test fires. And there are three new components — two stiffeners and the aft dome — that are being used for the first time.

That a good number of the QM-1 segments are made up of reused parts underscores one of the primary differences between the shuttle-era and SLS boosters: the latter won't be recovered. Given the supply of casings left over from the space shuttle program and the anticipated flight rate for the Space Launch System, Orbital ATK has been able to reduce weight and costs by omitting the parachutes and infrastructure needed to reuse the boosters.

The QM-1 test fire will record data through more than 500 instrumentation channels. Orbital ATK will also conduct an extensive inspection of the disassembled motor, allowing engineers to further analyze its components' performance.

The public is invited to view the QM-1 test fire from State Road 83 North, about 20 miles west of Corinne, Utah. The viewing area will open at 7 a.m. MDT on Wednesday. NASA is also broadcasting the test live on its television channel and through its website.

Click through to collectSPACE.com to view the full flight history for the QM-1 test booster.