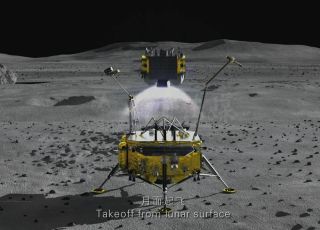 A Chinese Service Module now in Moon orbit is practicing steps needed for the Chang’e 5 mission, slated for 2017 – a multi-module spacecraft that would land, collect, and return to Earth lunar samples.
(Image: © China Space Website)

China is reporting new progress in shaking out procedures required for rocketing back to Earth samples from the moon.

The service module from China's experimental round-trip moon moon mission last year was used to test maneuvers in lunar orbit, including braking into a suitable position for orbital docking. The country's State Administration of Science, Technology and Industry for National Defense (SASTIND) noted the progress earlier this month, according to the state-run Xinhua news agency.

These practice steps mimic maneuvers to be used in the future Chang'e 5 sample-return moon mission being eyed for 2017.

Liu Jizhong, deputy chief commander of the SASTIND's lunar probe project is reported to say that the service module has proven the reliability of key technology needed for the docking of two spacecraft in the Chang'e 5 mission: a system that launches hardware off the moon carrying lunar samples and then links up with a return-to-Earth vehicle.

The spacecraft conducting China's tests in lunar orbit was launched in October 2014. That mission also involved a successful test of a reentry capsule last November that parachuted to Earth after making a circumlunar journey. [China's Moon Mission's Explained (Infographic)]

Following detachment of the re-entry capsule by the service module, the service module moved to the Earth-Moon Lagrange Point (L2) in late November of last year. It then departed the L2 point early this year and was flown into lunar orbit.

The service module now in lunar orbit is reportedly still operating smoothly. It apparently is slated to carry out further tests, including snapping lunar images and might conduct tests that evaluate lunar gravity.

Liu told Xinhua that by using the service module to carry out the set of ongoing tests, space engineers have simulated three key procedures needed for Chang'e 5: Earth re-entry from the moon at high speed; adjustment of lunar orbit and docking in lunar orbit, steps "laying a solid foundation for China’s three-step lunar program — orbiting, landing and returning," Liu said.

The Change 5 mission would be lofted moonward by a still-to-be tested Long March 5 booster, a maiden voyage that's planned for this year from China’s new Wenchang spaceport in south China's Hainan Province.

Leonard David has been reporting on the space industry for more than five decades. He is former director of research for the National Commission on Space and is co-author of Buzz Aldrin's 2013 book "Mission to Mars – My Vision for Space Exploration," published by National Geographic, with a new updated paperback version to be released in May. Follow us @Spacedotcom, Facebook or Google+.