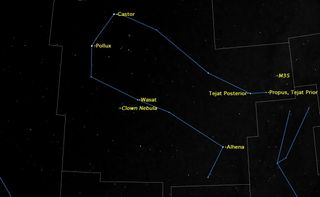 The constellation Gemini is currently well placed in the evening sky, just above and to the left of Orion for observers in the Northern Hemisphere.

Gemini is one of the 12 original constellations of the zodiac. It is in Gemini that the sun reaches its most northerly limit on the date of the solstice.

Although these two stars look almost identical to the naked eye, they are very different in a telescope. Pollux is a single star, but Castor is a double star. This is a true binary star: Its components separated by 90 astronomical units (8 billion miles or 13.4 billion kilometers) —slightly more than the diameter of Pluto's orbit.

Because Castor is 62 light-years from the sun, the apparent distance between the its two components is only 4 arc seconds, making it a challenging object in a small telescope. In an 8-inch telescope, you should be able to see a third component of this star, which has been reported to have a pale lilac color as opposed to the brilliant white of the two brighter components.

From the two bright stars, Castor and Pollux, at the upper left of Gemini, two parallel chains of stars mark the two brothers, stretching down to two stars, Tejat Posterior and Tejat Prior, for the upper twin, and a single star Alhena, for the lower twin.

Just above Tejat Prior is one of the finest open clusters in the sky, number 35 in Messier's famous catalog of deep sky objects. Messier 35 is 2,200 light-years away and contains hundreds of stars. How many stars you see depends on the size of your telescope. About 75 stars can be counted in an 8-inch telescope; this number doubles in a 12-inch.

About half way between Pollux and Alhena is another double star, Wasat. Unlike Castor, whose two main stars are almost equal in brightness and color, Wasat's components are very different. The primary star is magnitude 3.5 and yellow in color, while the secondary star is much fainter, magnitude 8.2, and bluish in color. In the magnitude scale used by astronomers to denote brightness, larger numbers correspond to fainter objects.

While in the neighborhood of Wasat, look to its south for a bright planetary nebula, known as the Clown Nebula or the Eskimo Nebula. It gets its name from its similarity to a tiny face. It's surprising that Messier didn't include this in his catalog, because it is very bright, brighter than many Messier objects. Perhaps its small size confused him; it is easily mistaken for a star. It is easily visible in almost any telescope, though it takes a magnification of at least 150x to show that it isn't a star.

While observing Gemini with any optical aid, be sure to sweep the side of the constellation towards Orion, as the Milky Way lies behind these stars, and there are many beautiful star fields visible in binoculars or small telescopes.