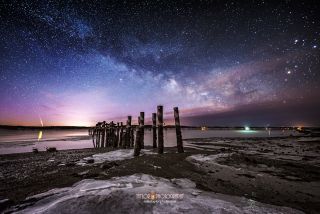 Mike Taylor has been a landscape and studio photographer for over 20 years and teaches night photography and processing technique workshops for the public. His images recently illustrated the book "The Secret Galaxy" by Fran Hodgkins (Tilbury House Publishers, 2014). Taylor contributed this article to Space.com's Expert Voices: Op-Ed & Insights.

In Maine, the temperature was a bone-chilling zero degrees on the night of Feb. 16, and getting colder with a slight wind chill. The skies hadn't been clear of clouds or precipitation for what seemed like weeks, so the opportunity to shoot the night sky was hard to pass up. After all, this was to be my second chance in 2015 to capture the Milky Way rising  in the New England skies.

Since last September, my girlfriend/business partner and I had been planning a night sky shoot at Sandy Point Beach on the Penobscot River in Stockton Springs, about an hour's drive away. We had been trying to get the right alignment of low tide, galaxy rise, moon phase and weather.

Having visited Sandy Point in the spring and summer, we had since plotted where the Milky Way would rise in relation to the beach — and the wonderful old pier pilings that long ago lost their decks — so we were confident of a strong composition if the weather continued to cooperate.

On the 16th, our main concern was whether the parking lot would be cleared of the three to four feet of snow that had been accumulating since December. We were hoping to sit in our heated car a few hundred yards away from the camera as it clicked away at the rising Milky Way and approaching sunrise. Alas, the parking lot hadn't been cleared. However, we were fortunate to discover a trail head nearby that had a small parking lot plowed out and a still-visible sign that pointed the way to the beach, a spot where some hardy souls had left their tracks since the last snow fall.

The calling of the clear sky and the Milky Way won out over our concerns about the cold. We trudged through the woods at 3:00 a.m., flashlights in our gloved hands so we could follow the trail. Thankfully, most of the snow was packed hard enough to hold our weight, though every few yards or so we'd step into a soft spot and plunge downward, sometimes hip-deep into the gasp-inducing cold. The crunching of snow and our hurried puffs of breath were the only sounds. [The Milky Way: How to See It in the Summer Night Sky ]

Once we reached the beach, we gingerly crossed the ice-encrusted rocks and frozen seaweed to find the right spot to set up the camera. Instead of the usual soothing whoosh and whisper of the incoming tide lapping the sand, there was just a crack of the shifting ice on the shore under our feet.

During the summer and spring, the pilings had been covered with squawking sea gulls, shore birds, barnacles and the occasional nest. Now, ice spilled down the pilings like candles that had melted and there wasn't the slightest hint of any wildlife in the area. The Milky Way was just beginning to appear in the southeastern sky behind a light cloud cover, so we chose a composition and set up the camera to start firing away for the next 2 hours.

The tide comes up quickly at this spot, so we made sure to place the camera gear a good 50 feet away from the waterline. After all was said and done and we were packing the gear back up to head home, the tide had come up all the way to the tripod legs.

Right at 5:00 a.m. we were treated to a rare and beautiful sight: On the east side of this scene a brilliant green-yellow fireball streaked down towards the horizon and left a bright reflection in the icy water of the river.

The American Meteor Society posted many reports of a fireball far away in the Pennsylvania/Ohio area at that same time, so we added our own fireball's information to the mix. And yet, after speaking with some good folks at NASA's Meteoroid Environments Office and the American Meteor Society, we learned this was not the fireball that occurred near Pittsburgh. Since fireballs are a relatively uncommon occurrence, it's interesting that two bright meteors streaked through the sky at the exact same time.

We'll be lining up some more info to determine if this meteor came from the same sky radiant, or if it was just a random coincidence. We're now checking to see if anyone else in Maine reported the meteor at the same time.

Processing the image: I imported the RAW file into Adobe Photoshop Lightroom and adjusted highlights and shadows, white and black levels, contrast, clarity, noise reduction, color balance, selective sharpening, lens, and chromatic aberration corrections. I exported that file as a TIF into Adobe Photoshop for some selective masking, soft light layering for the sky, opacity and luminosity blending, and I used a Topaz Clarity plug-in to retrieve some details in the foreground. I finished off the image with a slight crop and vignette.

Follow all of the Expert Voices issues and debates — and become part of the discussion — on Facebook, Twitter Google+. The views expressed are those of the author and do not necessarily reflect the views of the publisher. This version of the article was originally published on Space.com.