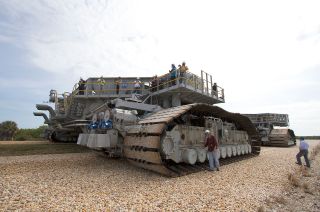 With an eye towards the future, NASA commemorated the first 50 years of its two rocket-carrying crawler-transporters on Monday (Feb. 23) by taking one of the newly-upgraded massive machines out for a test drive to the launch pad.

Crawler-transporter 2, referred to as CT-2, lumbered out of NASA's Vehicle Assembly Building last Wednesday (Feb. 18) to begin the 4.2-mile (6.8 km) trek to Pad 39B at the Kennedy Space Center in Florida. NASA invited members of the media and guests to tour the crawler as it arrived at the pad on Monday to mark the tracked vehicle's first half-century of service.

"This is a historic day witnessing the move of the crawler to Pad 39B," Lisa DeVries, crawler-transporter lead safety engineer for Cummings Aerospace, said. "Thinking back on all that the crawler has done in the last 50 years, from the Apollo program to the space shuttle program, is really incredible." [Apollo's Moon Missions in Photos]

CT-1 and CT-2, dubbed at one point "Hans" and "Franz," were originally designed and built by Marion Power Shovel of Ohio in the mid-1960s to support NASA's lunar landing efforts. The two vehicles were needed to move the Saturn V (and later Saturn IB) rockets of the Apollo program from the assembly building out to the launch pad.

Tested during short drives in 1965, the first real use of the crawler-transporter was on May 25, 1966, when the Saturn V 500F, a facilities integration mockup, was moved out to Pad 39A. The crawler transported its first full-up Saturn V, the unmanned Apollo 4 launch vehicle, on Aug. 26, 1967.

With the end of the Apollo program in 1975, the crawlers were modified to support the space shuttle. For 30 years, CT-1 and CT-2 delivered the winged orbiters, mounted to their external fuel tank and solid rocket boosters, to Pads 39A and B for their 135 missions to Earth orbit.

During those three decades, the crawlers were upgraded, including gaining a laser docking system in 1985, enabling them to park within a half- to a quarter-inch of the fixed "dead zero" position at the launch pad and in the Vehicle Assembly Building. In 2004, the vehicles were also each outfitted with a new set of 456 shoes, each weighing 2,100 pounds (950 kilograms), on the eight giant tank-like tracks that propel them forward.

With the space shuttle's retirement almost four years ago, NASA's Ground Systems Development and Operations Program at the Kennedy Space Center has been focused on "beefing up" CT-2 to be ready to support the agency's Space Launch System (SLS) heavy-lift rocket, targeted to first fly in 2018. CT-1, meanwhile, has been strengthened to handle commercial rockets and spacecraft as needed.

In 2012, CT-2's original alternating current generators and associated parts were removed. Two new 1,500 kilowatt diesel engines and generators were installed in their place. Work continued through 2014 to modify and upgrade the crawler to extend the life of its onboard systems, including the addition of 88 new traction roller bearing assemblies, a modified lubrication delivery system and new temperature monitoring system.

The upgrades were necessary to increase the lifted-load capacity of CT-2 from 12 million to 18 million pounds (5.4 to 8.2 million kilograms) to support the weight of the SLS and its Orion crew module on a mobile launcher platform.

"The crawlers are ready to support NASA's SLS program and commercial missions for the next half century," John Giles, crawler project deputy manager, said in a statement on Monday.

"I am proud to be a part of the team that is working on the upgrades to CT-2 in support of the SLS program," DeVries said, "preparing the crawler for the next 50 years of space exploration."

Click through to collectSPACE.com for more photographs from Crawler-Transporter-2's 50th anniversary test drive to the launch pad.