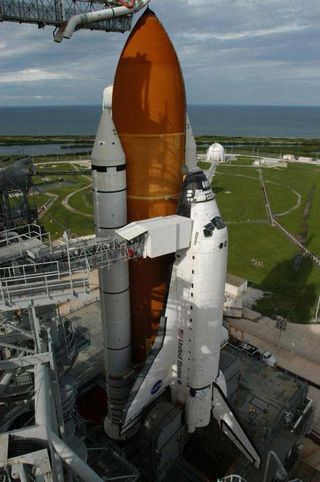 "These guysdeserve a break with the weather," Jett said Saturday of the shuttle workersand flight controllers. "We hope they see Atlantis leave the pad on Wednesday."

Currentforecasts predict a 70 percent chance of favorable weather conditions fortoday's planned space shot, with only clouds and isolated showers presenting athreat at launch time. NASA has twomore opportunities to launch Atlantis this week - Thursday and Friday -before standing down to avoidconflicts with an upcoming Russian Soyuz launch carrying a new crew to theISS on Sept. 18.

"I think we'reall excited, of course," NASA launch integration manager LeRoy Cain saidTuesday. "We've worked so hard to get to this point."

Originallyset to launch on Aug. 27, Atlantis' STS-115 mission was delayed first due to a launchpad lightning strike, which prompted subsequentsystems checks to ensure the shuttle and its boosters were unscathedfrom the 100,000-amp bolt. Flight controllers then hauled Atlantis off itslaunch pad to shield it from what was then TropicalStorm Ernesto.

But they stoppedin mid-journey to NASA's massive Vehicle Assembly Building as Ernesto weakened,and returned to Pad 39B in an unprecedentedmove to preserve this week's launch attempt.

"As it'sbeen said, the first few inches are the hardest part of the whole flight," Cainsaid. "And that's really true to a large extent. I'm excited, I think the wholeteam is excited."

Atlantis'STS-115 crew is hauling the 17.5-ton Port 3/Port 4 (P3/P4) truss segments tothe ISS along with a pair of expansive solar arrays to build up the outpost'spower grid.

The missionis first of at least 15 planned shuttle flights by NASA and its internationalpartners to complete the ISS by September 2010, when the space agency plans toretire its remaining three orbiters.

The missionalso marks a return to the $100 billion station's construction after the two test missionsthat followed the loss of Columbia and its seven-astronaut crew. A chunk offoam insulation from Columbia's external tank tore free during launch andcritically damaged the shuttle's heat shield, leading to its destruction uponreentry.

Since then,NASA has made incrementalimprovements to shuttle fuel tanks to reduce the amount of foam shedding atliftoff, and continues to seek additional avenues - such as changes to 16foam-covered brackets known as icefrost ramps - for modification.

"I'mexcited that after a substantial period of time of redesign and rethinking andretooling and preparation, we are into the heart of the [ISS] assembly," NASAspace shuttle program manager Wayne Hale said this week. "We have certainly gotour fingers crossed that it's going to go very well and we've made plans thatcover every possible contingency that we can think of."

Threespacewalks are planned during Atlantis' 11-day STS-115 mission to installthe new portside trusses and deploy the solar panels, which will have awingspan of about 240 feet once unfurled.

For Maclean- one of four STS-115 spacewalkers who plans on being the first Canadian toactually wield the space station's Canadian-built robotic arm - that missionbegins at 8:38 a.m. EDT (1238 GMT) today, when he and his crewmates walk out oftheir quarters and head to the launch pad.

"For me,walking out to the pad...will be much like walking into an Olympic stadium foryour athletic events," the Canadian astronaut said. "Many countries will beparticipating in the spirit of international cooperation, and our family andour friends, who believe in what we do, will be in the front seats."

MacLean hasrepeatedly said that the busy STS-115 mission will not only be busy, buteye-catching when he and his crewmates deploy the new ISS solar arrays.

"It's complexwhat we do, it's not easy," Maclean said. "I promise you we'll bring home agold medal."

NASA will broadcast Atlantis' launch countdown and planned liftoff on NASA TV beginning at about 6:30 a.m. EDT (1030 GMT). You are invited to follow the countdown's progress using SPACE.com's feed, which is available by clicking here.