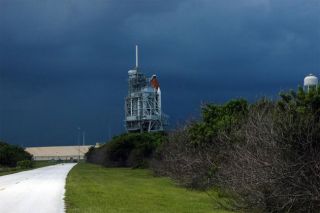 "It's clearin our minds that we are rolling back per plan unless something reallyextraordinary happens," NASA launch director Michael Leinbach said during amorning briefing here at the Kennedy Space Center (KSC).

There areonly two opportunities to stop rollback procedures - one Monday afternoon and anotherjust before Atlantis is lifted of the launch pad - should Ernesto weaken orshift course dramatically.

"It'sunfortunate that we're in this situation, but we are and we know how to dealwith it," Leinbach said.

TropicalStorm Ernesto is in the Caribbean and approaching southeastern Cuba, where it is expected to weaken before again building up to a Category 1 hurricane bound forthe south Florida coast. NASA launch controllers fear the storm could barrageAtlantis' launch pad with wind blowing in excess of 40 knots and plan tosafeguard the shuttle in KSC's immense Vehicle Assembly Building (VAB).

Leinbachsaid pad crews are removing the super-cold propellant that powers Atlantis'fuel cells from the orbiter's tanks. They will decide whether to disconnectsystems controlling the explosive bolts aboard Atlantis' solid rocket boosters- the first window for stopping rollback - early this afternoon, he added.

Weather hasconsistently dogged the launch of Atlantis' planned STS-115 mission to delivernew solar arrays and trusses to the ISS and resume construction of the orbitallaboratory. A Friday lightning strike to Pad 39B vehicle checks that delayedlaunch attempts on Sunday and Monday, with Ernesto forcing the Tuesday scrub.

NASA hasnot set a new launch date for Atlantis' 11-day mission but the shuttle can launchanytime through Sept. 7, when shuttle officials agreed to stand down so Russianspace officials can launch a Soyuz spacecraft toward the ISS on Sept. 14.

If Ernestoweakens to the point Atlantis does not have to leave its launch pad, theshuttle could be primed for launch late this weekend, possibly by Sept. 3, NASAofficials said.

"If weactually roll back...we can't get to a T-0 before Sept. 7," STS-115 MissionManagement Team (MMT) chairman LeRoy Cain said during the briefing.

It wouldtake eight days once Atlantis is returned to its launch pad, assuming nopost-storm clean up or repairs at KSC are required, Leinbach added.

Jettreportedly said the his STS-115 astronaut crew would likely head back toJohnson Space Center for additional training in Houston should it becomenecessary to rollback the shuttle and evacuate aircraft from the ShuttleLanding Facility here at KSC.

Shuttlemanagers are still hoping to launch Atlantis during its current window, but arelooking at other opportunities later this year.

"We havealready started already looking at our options beyond September, if you will,"Cain said. "By no means are we giving up on September, but it's just the way wedo business."

WhileRussian space officials could opt to delay the Soyuz flight, which will carry anew crew to the ISS, to Sept. 18 to allow NASA more time to launch Atlantis, theyare reluctant to do so because it would push the landing of another Soyuz -carrying Expedition 13 astronauts Pavel Vinogradov and Jeffrey Williamscurrently aboard the ISS - into the dark predawn hours in the steppes ofCentral Asia's Kazakhstan.

The nextlighted window to launch Atlantis runs from Oct. 20 through Nov. 15, thoughspecific requirements can shave that opening down to just a few days or so,Cain said.

The mostoptimum time is a two-day period between Oct. 26-27, NASA has said.

"We are lookingat both ends of that window," Cain said of October's prime launch window,adding that there numerous other non-storm related scenarios that could preventa September space shot. "Those are the kinds of things that we're looking atjust to be a step ahead of the game."