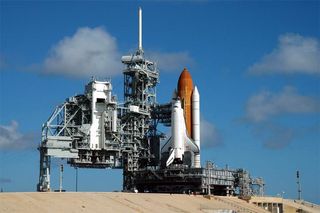 The shroud-like Rotating Service Structure will be rolled away from NASA's Atlantis space shuttle at Launch Pad 39B on Sept. 5, 2006, allowing a view much like this seen on Aug. 29.
(Image: © NASA/Jim Grossman.)

CAPE CANAVERAL, Fla. - A cloudy threat has grown for the plannedWednesday launch of NASA's shuttleAtlantis, though the weather outlook remains favorable for the spacecraft'sorbitalconstruction mission.

Those oddsalso include the possibility of isolated showers within 20 nautical miles of ashuttle runway to be used by Atlantis' STS-115 crew in the case of an emergencyjust after launch, Winters added.

NASA launchdirector Michael Leinbach said sensors in Atlantis' aft picked up minuteamounts of gaseous liquid oxygen, which is used alongside liquid hydrogen topower the shuttle's fuel cells in orbit. The sensor reading is likely due to aslight misalignment between a ground system and the orbiter, though the twosystems are now detached, he added.

"This isnot a problem for us," Leinbach said, adding that he does not expect to see thereading again before launch. "This is not a constraint."

Atlantis ishauling a 17.5-ton,$371.8 million pair of new trusses and solar arrays to the ISS, where theywill be installed on the station's port side during three planned spacewalks.The mission is slated to last about 11 days.

Meanwhile,launch pad workers are hoping to roll back a shroud-like Rotating ServiceStructure - which protects NASA shuttles from poor weather - by 3:00 p.m. EDT (1900 GMT) before afternoonthunderstorms arrive in the area. The activity could be pushed up an hour at themost, NASA officials said.

If needed,an extra day could be inserted on Flight Day 5 - which would be Sunday given aSept. 6 launch - to allow a focused inspection of Atlantis' heat shield, Halesaid.

While NASAis now routinely conducting a FlightDay 2 check of a shuttle's heat shield using a sensor-laden inspection boomthat adds an extra 50-foot (15-meter) reach to the orbiter's robotic arm. But afocused inspection to take an up-close look at certain areas will only be addedto the STS-115 crew's schedule if absolutely necessary, NASA officials said

"We don'thave that scheduled on the STS-115 timeline but we know that it is apossibility," Hale said of the focused inspections, adding that a second heatshield check is also scheduled near the end Atlantis' flight to scan fororbital debris damage. "There is a hope that, perhaps, we won't need to dothat."