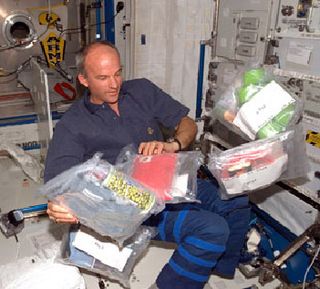 Inside the U.S. laboratory, astronaut Jeffrey N. Williams, Expedition 13 flight engineer and NASA science officer, pulls out some food items from among personal supplies for the current inhabitants of the International Space Station. Photo
(Image: © NASA.)

When NASA's shuttle Atlantislaunches toward the InternationalSpace Station Wednesday, its six-astronautcrew will leave the chef special at home.

Tucked away among the 750 pounds(340 kilograms) of cargo in Atlantis' middeck lockers are some fresh fruit andvegetables, but no gourmet meals akin to those designed by celebrity chefEmeril Lagasse and launchedto the ISS aboard Discoveryin July, NASA spokesperson William Jeffs told SPACE.com.

Admittedly, the primary mission ofAtlantis' STS-115mission, which is commanded by veteran NASA astronaut Brent Jett, is toresume construction of the ISS and attach two newtrusses and a shiny pair of solar wings that will double the station'scurrent power supply once activated later this year. The mission is setto launch on Sept. 6 at 12:28:46 p.m. EDT (1628:46 GMT).

But the space station'sthree-astronaut crew - Expedition13 commander PavelVinogradov and flight engineers JeffreyWilliams and ThomasReiter - will likely miss the zesty orbital meals dreamed up by Lagasse anddelivered to the ISS during July's STS-121shuttle mission.

"It was so tasty, we absolutelyloved it all," Vinogradov told Lagasse during a space-to-ground phone call lastmonth. "That was a true and wonderful surprise."

"We have a longing for a little bitspicier food," Reiter told Lagasse. "Our perception of taste is a little bitdecreased."

Lagasse told the ISS crew that hehas been a long-time believer in human spaceflight.

"I have to tell you that ever sinceI was a little boy, I've been a huge fan of the space program," said Lagasse,whose recipes and ISS phone call will be featured in an October episode of hiscooking show "Emeril Live." "I want to say what an absolute honor it is for youto share my food with you."

On Williams' short list of Earthfoods which he misses most are an open cup of coffee - which he can taste morethan the bagged and straw-drunk versions on the ISS - and his wife Anna-Marie'scooking.

"In general, I crave my wife'scooking," Williams told Lagasse. "She's an excellent cook and she makes somegreat salads."

Williams invited Lagasse to join theExpedition 13 crew as their official chef, if - of course - he's ever in theirorbital neighborhood.

"Now, that woulddefinitely be kicking it up a few notches," Lagasse said.