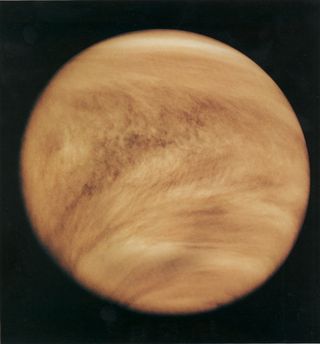 Venus would not be a pleasant place for people to live in the solar system. The planet's active volcanoes and runaway greenhouse effect would make it a difficult place to survive.
(Image: © NSSDC Photo Gallery)

NASA got its budget request for 2016, Jupiter and the moon dance in the night sky and private companies might be one step closer toward getting property rights on the moon. Here are Space.com's picks for the best space and stories of the week:

NASA gets a brand new budget

NASA Administrator Charles Bolden presented the new budget to NASA employees during a news conference Monday (Feb. 2) just after the full federal budget was released by the White House. While many of the agency's spaceflight initiatives will be fully funded if this budget is passed, others aren't so lucky. [Full Story: White House Seeks $18.5 Billion NASA Budget, with Deep Space in Mind]

Learning how to live on Venus

From its extreme temperatures to constant cloud cover, Venus would not be a very pleasant place for humans to live. Space.com contributor Joseph Castro breaks down how people might try to live on Earth's cloudy planetary cousin in part two of his series on how to live in the solar system and beyond. Look for part three coming next week. [Full Story: What Would It Be Like to Live on Venus?]

Jupiter and the moon have a dance

If your sky was clear this week, you probably saw a bright, shining object near the moon. That object was most likely Jupiter climbing in the night sky. The pairing was at its peak a little while after the full moon rose on Feb. 3. [Full Story: Jupiter and the Moon Shine Together Tonight: How to See It]

Paving the way to a private moon base

The U.S. Federal Aviation Administration has given private companies the tentative "okay" to start working toward creating a private moon base. A letter to Bigelow Aerospace from the FAA's Associate Administrator for Commercial Space Transportation encourages the company to continue development of the base. [Full Story: Business On the Moon: FAA Backs Bigelow Aerospace]

NASA's New Horizons probe has taken new pictures of Pluto, marking the first time the spacecraft have imaged the cosmic body since it started its six-month approach to the dwarf planet. [Full Story: New Views of Pluto Captured By NASA Spacecraft (Photos)]

The Fermi telescope, which has been gazing at the gamma ray sky for years, has found that observed gamma rays come from point sources, not an unknown diffuse glow, as some scientists expected. [Full Story: Mystery of the Universe's Gamma-Ray Glow Solved]

The Hubble Space Telescope snapped an amazing image of three of Jupiter's moons moving across the giant gas planet at the same time. This cosmic coincidence only happens once or twice every 10 years. [Full Story: Wow! Hubble Telescope Sees Rare 3-Moon Shadow Dance on Jupiter]

A mock Mars One mission in Utah

Seven people who hope to go on a one-way trip to Mars with Mars One will spend two weeks at the Mars Desert Research Station near the Utah town of Hanksville. Their mission starts Saturday (Feb 7). [Full Story: Mock Mars Mission Starts Saturday in Utah Desert]

The private spaceflight company SpaceX will start the first tests of its Dragon capsule built to carry humans to and from the International Space Station. SpaceX officials should launch an uncrewed test of the capsule's abort system — designed to take astronauts to safety should something go wrong during launch — soon. [Full Story: SpaceX's Dragon Spacecraft Set for Key 'Pad Abort' Test (Photos)]

A new 'Lord of the Rings' planet

A newly-discovered "super Saturn" planet has rings that would rival Saturn's and the amazing artwork to boot. [Full Story: This Super-Saturn Alien Planet Might Be the New 'Lord of the Rings']