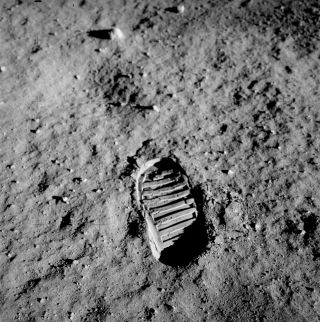 One small step for making business on the Moon a new economic sphere?
(Image: © NASA)

The U.S. Federal Aviation Administration's Office of the Associate Administrator for Commercial Space Transportation (AST) has given thumbs-up regarding private sector operations on the moon.

The letter is in response to a Bigelow Aerospace "payload review" tied to commercial development of the moon.

"Moreover, we recognize the private sector's need to protect its assets and personnel on the Moon or on other celestial bodies," the FAA AST letter explains. "Supporting non-interference for private sector operations will enhance safety and only add to the long history of preserving ownership interests in hardware and equipment."

Furthermore, the letter explains that the Department of State's fundamental concern is that the national regulatory framework, in its present form, is "ill-equipped" to enable the U.S. Government to fulfill its obligations under the Outer Space Treaty with respect to private sector activities on the moon or other celestial bodies.

In 2013, after completing a Space Act Agreement on behalf of NASA to identify potential next steps for commercial space development, Bigelow Aerospace determined that the best destination for future private and public sector activities is the moon.

Unlike asteroids or Mars, Bigelow Aerospace believes that the moon has the potential to support near-term opportunities for economic growth.

"As is the case with any new frontier, prospects remain uncertain, but the moon offers a variety of minerals and resources that could support mining or other forms of commercial operations," Gold added. "Bigelow Aerospace sees its role in lunar development as the historic equivalent of the Hudson Bay Company, providing the necessary habitats, equipment, and transportation for entrepreneurs to execute their business plans. Bigelow Aerospace wants to enable individuals, companies, and countries to transform the moon into a dynamic arena for imagination and innovation."

Beginning of a process

Does the FAA now have jurisdiction over the moon? Does this letter fully resolve the legal vacuum that has existed for low-Earth orbit (LEO) and beyond LEO commercial operations?

"This is the beginning of a process, not the end," Gold said. "This response represents a first step by the AST to use what authority it has to create a safe and attractive environment for commercial lunar development. The first step is always the most challenging, and we're grateful to the FAA AST and their colleagues at the Department of State for this decision."

Leonard David has been reporting on the space industry for more than five decades. He is former director of research for the National Commission on Space and is co-author of Buzz Aldrin's 2013 book "Mission to Mars – My Vision for Space Exploration," published by National Geographic, with a new updated paperback version to be released in May. Follow us @Spacedotcom, Facebook or Google+. Originally published on Space.com.