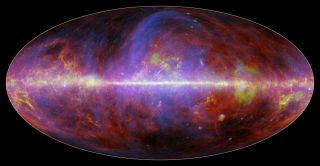 A view of the Milky Way galaxy in microwaves, captured by the European Space Agency's Planck satellite. The different colors correspond to different elements, including gas, dust, and energetic particles.
(Image: © ESA/NASA/JPL-Caltech)

The Milky Way galaxy is made up of more than just stars and a new series of galactic maps has captured that diversity of gas, dust, particles and magnetic fields in amazing detail.

The new Milky Way galaxy maps are based on observations by the European Space Agency's prolific Planck space observatory. They show the Milky Way in four distinct color signals that, when combined into a single mosaic, create a hypnotic view of our home galaxy.The Planck satellite observed the oldest light in the universe during its mission. In the new Milky Way maps, red colors indicate dust, yellow is gas, green is high energy particles, and blue is the magnetic field.

"Planck can see the old light from our universe's birth, gas and dust in our own galaxy, and pretty much everything in between, either directly or by its effect on the old light," Charles Lawrence, the U.S. project scientist for the mission at NASA's Jet Propulsion Laboratory in Pasadena, California, said in a statement.

With its microwave vision, Planck can detect more than just the cosmic microwave background.

One of the new Milky Way images released by the Planck collaboration is an overview that shows four separate galaxy views, as well as the final view of them combined. The red version (upper left) show the heat coming from dust throughout the Milky Way galaxy. Planck can capture this thermal light even though the dust is extremely cold — about  minus 420 Fahrenheit (minus 251 Celsius).

The yellow version (upper right) shows carbon monoxide gas, which is concentrated in areas where new stars are being born. Meanwhile, the blue image (lower right) shows light created when charged particles get caught up in the Milky Way's magnetic field, and are pulled along like a swimmer in a current. The particles accelerate to nearly the speed of light and begin to radiate. The green image (lower left) shows light that is created by free particles that zip past one another without quite colliding. This kind of light is often associated with hot, ionized gas near massive stars.

The $795 million Planck satellite launched in 2009 and collected data for just over four years before being decommissioned in 2013. Last week, the collaboration released the results of a much-anticipated joint study with the BICEP2 collaboration. In March 2014, BICEP2 announced what some scientists took as evidence of inflation in the early universe and evidence of gravitational waves. But the results of the join analysis showed that BICEP2's measurements were contaminated by space dust.