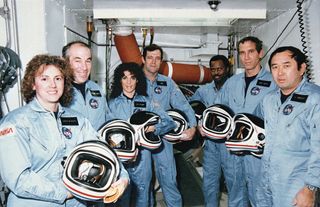 NASA is honoring its fallen astronauts with a special day of remembrance Wednesday (Jan. 28), the 29th anniversary of the Challenger space shuttle tragedy.

Space agency officials are conducting ceremonies at several different sites around the country during the annual event, to pay tribute to the three crewmembers killed in 1967's Apollo 1 fire, the seven astronauts lost when Challenger exploded in 1986 and the seven crewmembers who died when the shuttle Columbia broke apart upon re-entry to Earth's atmosphere in 2003.

"NASA's Day of Remembrance honors members of the NASA family who lost their lives while furthering the cause of exploration and discovery," agency officials said in a statement. "NASA Administrator Charles Bolden and other agency senior officials will hold an observance and wreath-laying at Arlington National Cemetery in Virginia from 9 to 10:30 a.m. [EST] Wednesday." [NASA's Fallen Astronauts: A Photo Memorial]

Various NASA centers are also hosting their own observances, officials added. The deputy director of Kennedy Space Center in Florida, for example, will lead a brief ceremony at the facility's visitor center at 10:30 a.m. EST (1530 GMT), and Marshall Space Flight Center in Alabama will hold a candle-lighting ceremony at 10 a.m. local time (11 a.m. EST; 1600 GMT).

The Apollo 1 fire, NASA's first mission-related tragedy, occurred on Jan. 27, 1967. Astronauts Gus Grissom, Ed White and Roger Chaffee were inside their crew capsule at Florida's Cape Canaveral Air Force Station, conducting a test of the vehicle, which was scheduled to launch on an orbital mission less than a month later. A fire broke out, and all three crewmembers were killed.

The accident investigation revealed that an O-ring in one of the orbiter's two solid rocket boosters failed on that cold morning, allowing hot gas to escape and causing the shuttle's huge external fuel tank to explode.

NASA grounded the space shuttle for nearly three years in the wake of the Challenger tragedy, returning the vehicle to flight in September 1988 with the STS-26 mission of the shuttle Discovery.

The shuttle fleet flew without any serious incidents for another decade and a half. Then, on Feb. 1, 2003, Columbia broke apart as it was gliding back to Earth after a 16-day space mission. All seven astronauts aboard were killed: Rick Husband, Willie McCool, Kalpana Chawla, Laurel Clark, David Brown, Michael Anderson and Ilan Ramon, who was Israel's first astronaut.

Investigators later determined that Columbia sustained damage during launch, when a piece of foam insulation broke off the external fuel tank and careened into the orbiter's left wing. The impact breached Columbia's heat shield in that spot, allowing hot atmospheric gases to infiltrate the wing during re-entry.

Another lengthy pause in shuttle operations followed this disaster. The next return-to-flight mission, also flown by Discovery, came in July 2005.

The space shuttle was grounded for good in July 2011, after flying 135 orbital missions over the course of 30 years. NASA currently relies on Russian Soyuz spacecraft to get its astronauts to and from the International Space Station but is encouraging the development of private American spaceships to take over this role. Astronaut taxis being built by SpaceX and Boeing should be ready to start flying crews by 2017, representatives of both companies say.

NASA officials aren't the only people who are pausing Wednesday to reflect on the risks involved with human spaceflight and to honor the memories of those who gave their lives for the cause. For example, European Space Agency astronaut Sam Cristoforetti sent out this note Tuesday (Jan. 27) to her 293,000 Twitter followers:

"May the memory of such a dark time in our past enlighten the future with wisdom and compassion. ‪#RemembranceDay"