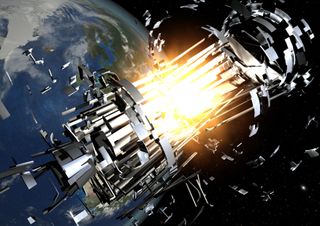 In-orbit explosions can be related to the mixing of residual fuel that remains in tanks or fuel lines once a rocket stage or satellite is discarded in Earth orbit. The resulting explosion can destroy the object and spread its mass across numerous fragments with a wide spectrum of masses and imparted speeds.
(Image: © ESA)

Earth is encircled by an orbiting junkyard.

Following 50 years of space exploration and utilization, more than 22,000 pieces of space junk at least 4 inches (10 centimeters) wide are now being tracked in Earth’s orbit.

And hundreds of thousands to millions of bits of space flotsam are too small to be spotted with current tracking capabilities. Many of these tiny, fast-moving pieces are capable of crippling or taking out a spacecraft. [7 Wild Ways to Clean Up Orbital Debris]

In October, for example, the International Space Station had to be maneuvered via Europe’s Automated Transfer Vehicle (ATV) to avoid a hand-size piece of Russia’s Cosmos 2251 satellite, which broke up after colliding with another satellite in 2009.

Any cleanup program will take years to implement and decades to carry out. To be sure, space junk is an international concern and will be the topic of many high-level discussions in 2015 and beyond.

The University of Maryland's Center for Orbital Debris Education and Research (CODER) held an Orbital Debris Workshop over three days this past November to discuss.a number of space-junk issues, including intersections with space policy and national security, as well as treaty and legal concerns.

Also detailed in the meeting were entrepreneurial opportunities, as well as debris tracking, modeling and simulation technologies.

Now retired from NASA, Kessler has been dubbed the "Father of Orbital Debris." In the 1970s, he proposed that space-junk collisions could have a dramatic cascading effect, eventually generating so much debris that the flotsam could threaten space exploration and satellite operations. This troubling snowball effect is now known as the "Kessler syndrome."

Kessler was pleased to see a diversity of experts at the meeting, all of whom were interested in maintaining a sustainable space environment.

Kessler said that there is a critical need for government, commercial and legal communities to work together "to develop a realistic long-term space management policy that leads to a sustainable space environment." [Satellite Quiz: How Much Do You Know?]

Another workshop participant was Roger Launius, Associate Director for Collections and Curatorial Affairs at the Smithsonian Institution’s National Air and Space Museum in Washington, D.C.

"My first thought is that this is fundamentally a policy problem to be solved, yet there seems to be no serious effort underway — not even modest rules of the road — that will solve this problem," Launius told Space.com.

A good majority of the people participating in the meeting were engineers who focused on technological fixes, Launius said. "Some of those [proposed solutions] might actually work, but they also raise more policy issues which no one seems to know how to fix," he said.

Lasers in the jungle

For example, the use of lasers to de-clutter space was championed by some during the meeting.

"Even if technically feasible, what level of international saber rattling would come from efforts to laser anything in space, either from the ground or from spacecraft? Weapons in space … how could they be considered anything else?" Launius said. "What could possibly go wrong?"

"Orbital debris really seems to be a 21st century problem of the community of nations, and it will have to be solved in an international setting," Launius said. One worrisome trend, he said, is the increasing number of tiny CubeSats and their potential for creating large additional debris fields.

Another workshop attendee was Dennis Wingo, CEO of Skycorp Inc., based at the NASA Ames Research Center in Moffett Field, California.

"The principal problem with low-Earth orbit [LEO] orbital debris is that the Russians own most of it and will allow nothing to be done," Wingo said. "Nothing will be done for the rest until a disaster happens and everyone is forced into it."

Wingo’s view is that there’s a fundamental technical problem: the amount of energy that it takes to move from one piece of debris to the next.

"As far as I can see, electrodynamic tethers are the only realistic means of dealing with the problem," Wingo said, referring to a strategy that would use magnetic-field forces of the Earth to hasten the orbital decay of a satellite.

The experts at the CODER meeting also focused on ways to make taking out space junk profitable.

"Due to energies required to move from orbit to orbit, it is almost impossible to make a business case for commercial LEO orbital debris removal," Wingo said.

But the situation at the higher-up geosynchronous orbit (GEO) — where many communications and weather satellites lie — is a different story, Wingo said. Most debris in GEO is co-orbital — two or more objects share, or almost share, an orbit.

"In GEO, we cannot wait until a disaster, due to the enormous financial consequences involved in a single collision," Wingo said. "Yet neither the operators nor the insurance underwriters seem to have any sense of urgency on the matter."

"I wish I had some answers, but at least the first step is to admit we have a problem. The people at the workshop at least recognize the problem. I'm not sure most others do," Launius concluded.

Leonard David has been reporting on the space industry for more than five decades. He is former director of research for the National Commission on Space and is co-author of Buzz Aldrin's 2013 book, "Mission to Mars — My Vision for Space Exploration," published by National Geographic with a new updated paperback version to be released in May. Follow us @Spacedotcom, Facebook or Google+. Originally published on Space.com.