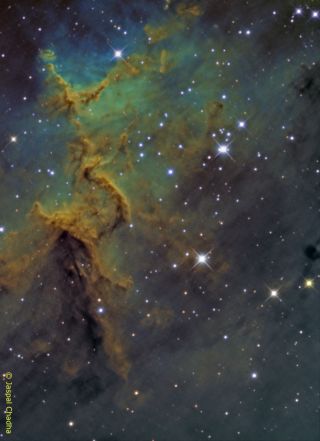 Astrophotographer Jaspal Chadha took this stunning image of the core of the Heart Nebula over four nights in December 2014 and January 2015.of London
(Image: © Jaspal Chadha)

Stunning cosmic clouds and stars are captured in this image of Melotte 15 showing the newborn star cluster in the core of the so-called Heart nebula.

Astrophotographer Jaspal Chadha of London took this image over four nights in December 2014 and January 2015. Chadha also took a wide-field image of the same region.

Melotte 15 lies in the center of emission nebula IC 1805, also called the Heart Nebula due to its Valentine's-Day related shape. It is located about 7,500 light-years away toward the constellation Cassiopeia. A light-year is the distance light travels in one year, or about 6 trillion miles (10 trillion kilometers). The newborn stars in the core are about 1.5 million years old. Radiation from these massive, hot stars create the imaginative shapes of the cosmic clouds in the image. [What Do You See? Strange Nebula Shapes (Photo Gallery)]

"The processing of the Mel 15 was really difficult as there aren't NASA images of the core that I could relate too for color comparison," Chadha wrote in an email to Space.com. He captured the wide-field view with a Sky watcher Esprit 100ED and the core (Mel 15) taken with a Altair Astro RC250TT Telescope.