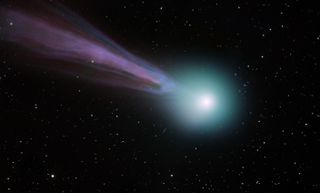 Astronomer Nick Howes used the Tzec Maun Network to obtain this gorgeous image of Comet Lovejoy on Jan. 8, 2015. The image was taken using the TOA 150 telescope and SBIG ST6303 CCD at the Siding Spring Observatory in Australia.
(Image: © Nick Howes)

Amateur astronomers and astrophotographers around the globe have been keeping their eyes on the distinctly green glow of Comet Lovejoy, a cosmic object discovered last year that continues to amaze in telescope views. New images (and a short movie) of Comet Lovejoy as it makes a close pass by the Earth.

On Jan. 10, amateur astronomer Steve Siedentop took a series of 100 images of Comet C/2014 Q2, also known as Comet Lovejoy, as it passed over Grayson, Georgia. Siedentop then compiled the images into an aweseom time-lapse video of Comet Lovejoy showing the icy wanderer move across the night sky.

While Lovejoy appears to be moving rather quickly in the video, the images were taken over a 2-hour time span, between 11 p.m. EST (0400 GMT) and 1 a.m. EST (0600 GMT). To capture the images, Siedentop used a Meade Series 5000 80mm triplet APO and a Canon T2i camera using BackyardEOS. [Spectacular Photos of the Green Comet Lovejoy]

Siedentop isn't the only stargazer to cast his gaze up at Comet Lovejoy. The UK-based astronomer Nick Howes snapped an incredible shot of the Comet Lovejoy streaking across the sky. The image shows the comet wrapped in a brilliant green cloud of gas, with a wispy blue and purple tail trailing behind. Howes told Space.com that he took the image using the remotely operated Siding Spring Observatory in Australia and obtained via the Tzec Maun Network.

Comet Lovejoy is still visible in binoculars or small telescopes for observers with clear, dark skies.

The newfound comet, officially known as Comet Lovejoy C/2014 Q2, was first spotted by Australian amateur astronomer Terry Lovejoy last August. Comets are automatically named after the person who discovers them, and this is Lovejoy's fifth comet discovery to date (hence, there are references to another Comet Lovejoy prior to August 2014).

The radiant green light from Comet Lovejoy takes center stage in another recent image, this one captured veteran astrophotographer Justin Ng based in Singapore. Ng took the photograph on the night of Jan. 11 over a period of about 40 minutes.

Comet Lovejoy's green color is likely due to the presence of two gases — cyanogen (CN)2 and diatomic carbon (C2) — according to Tanya Hill of the Museum Victoria in Australia.

"The gases glow green when their molecules are ionized or excited," Hill wrote in an article for The Conversation. "Ionization causes electrons within the molecules to gain energy and when the electrons drop back down to their normal state, they give off light of a certain wavelength. For these molecules they emit green light, and since they are very strong emitters, their green color dominates the comet."

The green color makes Comet Lovejoy look like a glowing green emerald in a pile of white diamonds in this image taken by Victor Rogus in Jadwin, Missouri. The comet is in the lower half of the image, near the center. To the right of the comet, a meteor streaks across the sky.

Editor's note: If you capture an amazing photo of Comet Lovejoy with binoculars or a telescope and want to share it with Space.com, you can send in images and comments to managing editor Tariq Malik at: spacephotos@space.com.