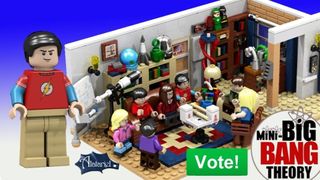 "The set represents the living room of Sheldon Cooper and Leonard Hofstadter, which is the core location of the series," the creators of the project wrote in a description. "It's filled with geeky details accurate to the show including Sheldon's board, Green Lantern lantern, Rubik's cube tissue box, DNA model, mini LEGO Death Star and more!"

Another fan-suggested kit with ties to space was also recently created. The popular "LEGO Ideas Research Kit" sold out in its first days after release and included a LEGO astronomer complete with telescope. A LEGO Ideas version of the Hubble Space Telescope also recently hit 10,000 supporters on the website and could be made into a set sometime in the future. [LEGOs and Space Travel: A Photo Gallery]