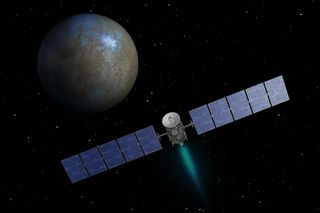 Artist's concept of NASA's Dawn spacecraft approaching the dwarf planet Ceres ahead of an orbital arrival on March 6, 2015.
(Image: © NASA/JPL-Caltech )

NASA's Dawn spacecraft has begun approaching Ceres ahead of a historic March arrival at the mysterious dwarf planet.

Dawn has officially entered the Ceres approach phase, after recently emerging from behind the sun relative to Earth and thus coming back into reliable communication range. The probe is now about 400,000 miles (640,000 kilometers) from Ceres and is cruising toward the 590-mile-wide (950 km) object at 450 mph (725 km/h), NASA officials said.

Dawn should enter orbit around Ceres — the largest object in the main asteroid belt between Mars and Jupiter — on March 6, 2015. When that happens, the spacecraft will become the first ever to orbit two different unexplored solar system bodies. (Dawn circled the protoplanet Vesta, the asteroid belt's second-largest object, from July 2011 through September 2012.) [Photos: Asteroid Vesta and NASA's Dawn Spacecraft]

Mission team members, and space scientists around the world, are eager to see Ceres up close.

"Ceres is almost a complete mystery to us," Dawn principal investigator Christopher Russell, of UCLA, said in a statement. "Ceres, unlike Vesta, has no meteorites linked to it to help reveal its secrets. All we can predict with confidence is that we will be surprised."

While Ceres and Vesta reside in the same general neighborhood, they appear to be quite different from each other. For example, the 325-mile-wide (525 km) Vesta is thought to be a dry body, while Ceres possesses an icy mantle and might even harbor a subsurface ocean of liquid water. (Indeed, Ceres might be capable of supporting life as we know it, some researchers say.)

The $466 million Dawn mission does not rely on tradititional chemical thrusters but rather employs a super-efficient ion propulsion system, in which ionized xenon gas is accelerated out the back of the spacecraft to generate thrust.

"Orbiting both Vesta and Ceres would be truly impossible with conventional propulsion. Thanks to ion propulsion, we're about to make history as the first spaceship ever to orbit two unexplored alien worlds," Dawn chief engineer and mission director Marc Rayman, of NASA's Jet Propulsion Laboratory in Pasadena, California, said in the same statement.

While March 6 marks the beginning of orbital operations at Ceres, another milestone will come by the end of January: At that point, Dawn's photos will be the best ever captured of the dwarf planet, NASA officials said.

Dawn launched in 2007 on a mission to learn more about the solar system's early days, and the planet-formation process, by studying Vesta and Ceres. The probe's prime mission is scheduled to end in July 2015.