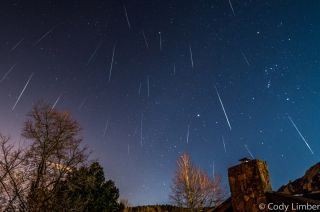 One of the most striking annual meteor showers of the year is set to peak tonight, and you can see it live online.

Even if bad weather or light pollution hampers your view of the night sky tonight (Dec. 13), three astronomy groups will host live views and expert commentary about the Geminid meteor shower to bring the celestial show to anyone with an Internet connection.

NASA and the online Slooh Community Observatory will broadcast live views of the Geminid shower tonight, with the Slooh's webcast begins at 8 p.m. EST (0100 Dec. 14 GMT) here. http://live.slooh.com/. It will include meteor views, commentary and the sounds of the meteors ionizing in the atmosphere.[How to Observe the Geminid Meteor Shower]

You can watch the Geminid meteor shower webcasts on Space.com, courtesy of NASA and Slooh. The Virtual Telescope Project based in Italy will also host a webcast late Saturday.

NASA's webcast — streamed from the agency's Marshall Flight Facility in Huntsville, Alabama — will show live shots of the st ky and officials will answer questions about meteor showers from 11 p.m. EST to 2 a.m. EST (0400 GMT to 0800 GMT) from Dec. 13 to Dec. 14. You can join NASA's Geminid meteor shower chat here: http://www.nasa.gov/connect/chat/geminids_2014.html.

The Geminid meteor shower could still be quite a show this year in spite of a bright moon. Skywatchers in dark parts of the world could see as many as one or two meteors per minute before the moon rises above the horizon and washes out the sky, according to Space.com skywatching columnist Joe Rao. The meteors will seem to emanate from the constellation Gemini, where the meteor shower gets its name.

"The Geminids are very strange because they hit Earth sideways," Slooh astronomer Bob Berman said in a statement. "It is the difference between being in a car and slamming head on into somebody as opposed to someone backing into you sideways, perhaps coming out of a driveway and crunching into you gently. These meteors hit us gently. While Summer’s Perseids strike Earth at 37 miles per second, that’s amazingly fast, and the Leonids are even a little bit faster, hitting us at just over 40 miles a second, these Geminids hit us at only 22 miles a second."

The slow speed of the Geminids can cause the appearance of more slow fireballs during this annual shower, making for a potentially spectacular show.

"Earth runs into a stream of debris from 3200 Phaethon every year in mid-December, causing meteors to fly from the constellation Gemini," NASA officials said in a statement. "When the Geminids first appeared in the early 19th century, shortly before the U.S. Civil War, the shower was weak and attracted little attention. There was no hint that it would ever become a major display."

Editor's Note: If you have an amazing photo of the Geminid meteor shower or any other skywatching image you'd like to share for a possible story or image gallery, please contact managing editor Tariq Malik at spacephotos@space.com.