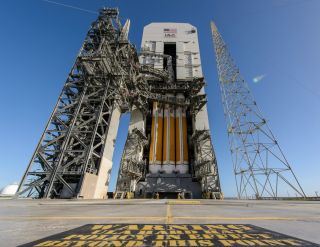 CAPE CANAVERAL, Fla. — They call it Orion. NASA's first deep-space capsule since the Apollo era is poised to launch on its maiden voyage Thursday (Dec. 4), and you can watch the action live online.

The Orion spacecraft, a capsule destined to fly NASA astronauts on deep-space missions to asteroids and Mars, is counting down to a planned 7:04 a.m. EST (1204 GMT) liftoff Thursday from a pad here at the Cape Canaveral Air Force Station. A massive Delta 4 Heavy rocket, the most powerful booster in use today, will launch the uncrewed test flight.

You can watch the Orion launch live on Space.com, courtesy of NASA TV, beginning at 4:30 a.m. EST (0930 GMT). The mission will last 4.5 hours and will send Orion higher and faster than any manned spacecraft in the last four decades. [NASA's Orion Test Flight: Full Coverage]

"It is a test flight, and it's set up to be a risky flight," NASA Orion Program Manager Mark Geyer told reporters on Wednesday (Dec. 3). That's why this mission is unmanned, Geyer added.

The test is risky because Orion is NASA's first new manned spacecraft designed to fly astronauts beyond low-Earth orbit since the era of the Apollo moon landings. For this mission, the Delta 4 Heavy rocket — built by United Launch Alliance — will loft Orion up to an altitude of 3,600 miles (5,800 kilometers), with the spacecraft then streaking back to Earth at nearly 20,000 mph (32,000 km/h).

Then comes the real test.

During re-entry, Orion's heat shield — the largest of its kind ever built — will have to survive searing temperatures of nearly 4,000 degrees Fahrenheit (2,800 degrees Celsius). Then the capsule's massive parachutes must deploy in order to send the gumdrop-shaped spacecraft down to a successful splashdown in the Pacific Ocean about 600 miles (970 km) southwest of San Diego, California. Splashdown should occur at 11:29 a.m. EST (1629 GMT).

Orion was built for NASA by Lockheed Martin to be the agency's new workhorse deep-space vehicle. NASA's space shuttle fleet retired in 2011, with the agency planning to use commercial space taxis to fly astronauts to and from the International Space Station beginning in 2017.

"It's a new mission, and there are some things that I'm sure we're going to learn tomorrow that will enable us to fly humans into deep space," said Mike Sarafin, the flight director for Orion's test flight, which NASA calls Exploration Flight Test-1.

Sarafin will watch over the Orion test flight from NASA's Mission Control Center in Houston, where a crack team of veteran flight controllers is tracking the flight.

Even legendary Apollo program flight director Gene Kranz, who watched over the infamous Apollo 13 mission, will be in the control room for this test flight, Sarafin said. There is a sense, Sarafin added, of the "gang getting back together again."

"The team has been tested in a number of ways, and it's time to get on with flying," Sarafin said.

And if all goes well, don't expect NASA to celebrate with just handshakes and hurrahs.

"Yes, we are going to have a splashdown party," Sarafin said. "We'll just take a little moment together as a team, to have a little food and drink to celebrate."