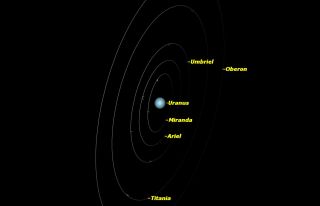 Observers with keen eyes will be able to see two little-spotted planets in the night sky this season.

The dim planet Uranus is now visible among the stars of Pisces, the Fish. It appears due south, about halfway from the horizon to the point directly overhead (the zenith) at around 8:30 p.m. local time. On clear nights, skywatchers should also be able to spot another distant planet, Neptune.

If you want to see Uranus, study a good star map of where the planet is positioned first. Then, scan that region with binoculars. Using a magnification of 150-power with a telescope of at least a 3-inch (7.6 centimeters) aperture, you should be able to resolve it into a tiny, pale-green, featureless disc. [Best Night Sky Events of November 2014 (Images)]

Neptune is much too faint to be viewed with the unaided eye, and it is slightly smaller than Uranus. Neptune is about seven times dimmer than Uranus, but if you have access to a dark, clear sky and carefully examine a good star map, you should have no trouble finding it with a good pair of binoculars.

Neptune is located among the stars of Aquarius, the Water Carrier. The planet stands about halfway up in the southern sky at around 6:30 p.m. local time. With a telescope, trying to resolve Neptune into a disc will be more difficult than it is with Uranus. You'll need at least a 4-inch (10.2 cm) telescope with a magnification of no less than 200-power, just to turn Neptune into a tiny blue dot of light.

If you live in the eastern United States, take note that on Dec. 1, the moon will point the way to Uranus. At 6 p.m. EST (2300 GMT) that evening, Uranus will be located less than a half degree below the waxing gibbous moon. A half degree is equal in angular size to the apparent width of the moon. If you're using binoculars, Uranus will appear as a tiny greenish "star."

Uranus, which lies at a mean distance of 1.8 billion miles (2.9 billion kilometers) from the sun, has a diameter of about 31,800 miles (51,100 km). At last count, Uranus has 27 moons, all in orbits lying in the planet's equator in which there is also a complex of nine narrow, nearly opaque rings, which were discovered in 1978. Uranus has a rocky core, surrounded by a liquid mantle of water, methane and ammonia, encased in an atmosphere of hydrogen and helium.

One bizarre feature of Uranus is that it's tipped over on its side. Thus, its seasons are extreme: When the sun rises at its north pole, it stays up for 42 Earth years. Then, it sets, and the north pole is in darkness for another 42 Earth years.

Sir William Herschel discovered Uranus on March 13, 1781, noting that it was moving slowly through the constellation Gemini. Initially, however, Herschel thought he had discovered a new comet.

NASA's Voyager 2 space probe passed Neptune in 1989 and showed that the planet has a deep-blue atmosphere, with rapidly moving wisps of white clouds as well as a Great Dark Spot, rather similar to Jupiter’s famous Great Red Spot. Voyager 2 also revealed at least three rings, composed of very fine particles, around Neptune. Neptune has 14 moons; one of them, Triton, has a tenuous atmosphere of nitrogen and, at nearly 1,700 miles (2,700 km) in diameter, is larger than Pluto.

Neptune's discovery arose from long-term observations of Uranus. It seemed to astronomers that some unknown body was somehow perturbing Uranus' orbit. In 1846, two astronomers, Urbain J.J. Leverrier (1811-1877) of France and John Couch Adams (1819-1892) of England independently were working on this problem. Neither knew what the other was doing, but ultimately, both men had figured out the probable path of the supposed object that was disturbing the orbit of Uranus.

Both men believed that the unseen body was then in the constellation of Aquarius. Adams was a student at the University of Cambridge in England, and he sent his results to astronomer Sir George Airy (1801-1892), with specific instructions on where to look for it. For some unknown reason, Airy waited a year before starting the search. In the meantime, Leverrier wrote to the Berlin Observatory, requesting that they search in the place he had noted. Astronomers Johann Galle and Heinrich d’Arrest did exactly as instructed and found the new planet in less than an hour.

Editor's Note: If you have an amazing image of Uranus, Neptune or any other skywatching photo you'd like to share for a possible story or image gallery, please contact managing editor Tariq Malik at spacephotos@space.com.