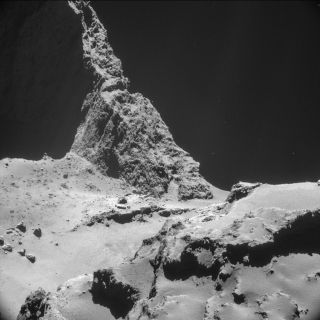 ESA’s Rosetta spacecraft spent most of the second half of October 2014 orbiting Comet 67P/Churyumov–Gerasimenko at less than 6.2 miles (10 km) from its surface.
(Image: © ESA/Rosetta/NAVCAM, CC BY-SA 3.0 IGO )

Relive last week's thrilling comet landing with a documentary about the historic space mission airing on PBS tonight (Nov. 19). The European Space Agency's Philae lander touched down on the face of Comet 67P/Churyumov-Gerasimenko on Nov. 12, and tonight the documentary "To Catch a Comet" will give viewers an inside look into how the mission became reality.

"'To Catch a Comet' follows the international team of scientists and engineers who guide Rosetta through the last year of its ten-year trajectory across the universe: around the Earth, around Mars, and twice through the asteroid belt to reach its destination," PBS representatives said in a statement. "In the nail-biting months before the landing, the team awakens Rosetta from three years of power-saving hibernation, manually navigates the craft through unexplored areas of the solar system, catches up to Comet 67P in a delicate cat-and-mouse orbiting dance, and releases a washing-machine-sized lander (named Philae) onto the comet’s surface." [See amazing photos from Philae and Rosetta]

ESA launched the Rosetta mission toward Comet 67P/C-G in 2004. The Rosetta orbiter and Philae probe arrived at the comet in August 2014, and Rosetta released the lander down to the icy body's surface last week. Philae bounced twice before coming to its final landing spot on the comet's face after its harpoon system, designed to keep the lander tethered to the comet, malfunctioned. The lander's life was cut short by the low-sunlight conditions in its landing spot. Philae needs a significant amount of sunlight each day to power its instruments. At the moment, the probe's primary batteries have run out, and Philae is hibernating until it can hopefully be awakened again later in the mission, which is expected to last until about December 2015.

"To Catch a Comet" is set to air at 10 p.m. EST on PBS tonight. Check local listings.