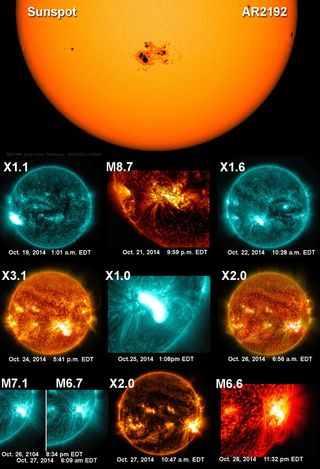 A humongous sunspot — the biggest one seen since 1990 — produced no aurora-causing events despite firing off 10 intense solar flares in less than two weeks last month, scientists say.

"Supersunspot" AR 2192 was so big that it was visible on the sun to people without a telescope (and some viewers did indeed see it through eclipse glasses during the partial solar eclipse of Oct. 23). At a staggering 1.65 billion square miles (4.27 billion square kilometers) in size, it was the33rd largest "active region" ever observed on the sun by astronomers since 1874.

Between Oct. 19 and Oct. 28, the sunspot erupted with six X-class flares (the most powerful type) and four medium-class M flares. None of these events, however, included a coronal mass ejection (CME). CMEs send clouds of superhot solar particles streaking through space at millions of miles per hour. CMEs that hit Earth can spawn geomagnetic storms that ramp up auroral displays (also known as the northern and southern lights) and can temporarily disrupt power grids and satellite navigation.

"Despite all the flares, this region did not produce any significant coronal mass ejections," said Alex Young, a solar scientist at NASA's Goddard Space Flight Center in Maryland, in a statement. "You certainly can have flares without CMEs and vice versa, but most big flares do have CMEs. So we're learning that a big, active region doesn't always equal the biggest events."

AR 2192 rotated onto the far side of the sun on Oct. 30. It could come back into view again in mid-November, if it survives, scientists said.

While size can matter when producing CMEs, the sunspot that spawned the Carrington event — a monster CME that fried telegraph lines on Earth in September 1859 — didn't crack the top 50 of sunspot sizes ever tracked, researchers said.

The large sunspot observed in 1990 reached its peak size almost exactly 24 years ago, on Nov. 18, and measured 3,080 MH, researchers said.