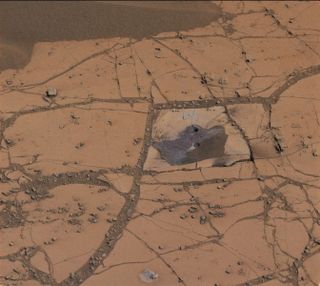 This image shows the first holes drilled by NASA's Mars rover Curiosity at the base of Mount Sharp. Curiosity drilled into an outcrop dubbed Pahrump Hills in late September 2014.
(Image: © NASA/JPL-Caltech/MSSS)

The first samples collected by NASA's Mars rover Curiosity at the foot of a huge Martian mountain have revealed a mineral first spotted by a NASA spacecraft in orbit around the Red Planet. It's the first time the rover's samples have matched mineral observations from space, NASA officials say.

In late September, Curiosity drilled into an outcrop dubbed Pahrump Hills at the base of the 3.4-mile-high (5.5 kilometers) Mount Sharp, which has been the 1-ton rover's main science destination since before its November 2011 launch. The samples collected during this operation contain high concentrations of iron-rich hematite, NASA officials announced Wednesday (Nov. 5).

"This connects us with the mineral identifications from orbit, which can now help guide our investigations as we climb the slope and test hypotheses derived from the orbital mapping," Curiosity project scientist John Grotzinger, of the California Institute of Technology in Pasadena, said in a statement.

Curiosity touched down inside the 96-mile-wide (154 km) Gale Crater in August 2012, on a $2.5 billion mission to determine if Mars could ever have supported microbial life. The six-wheeled robot spent about a year near its landing site, eventually finding evidence in drilled samples that an area called Yellowknife Bay was a habitable lake-and-stream system billions of years ago.

In July 2013, the rover began the long trek to Mount Sharp, finally reaching the mountain's base this past September. Mission scientists want Curiosity to climb up through Mount Sharp's foothills, whose rocks preserve a history of the planet's changing environmental conditions over time.

"We're now on a path where the orbital data can help us predict what minerals we'll find and make good choices about where to drill," said Curiosity science team member Ralph Milliken, of Brown University in Providence, Rhode Island. "Analyses like these will help us place rover-scale observations into the broader geologic history of Gale that we see from orbital data."

The Pahrump Hills activity was Curiosity's fourth full-up drilling operation. The previous three drilling runs were performed at Yellowknife Bay and on the way to Mount Sharp.

Curiosity will spend some time in the Pahrump Hills area — perhaps weeks, perhaps months — as the rover's handlers assess the terrain and search for more drilling targets, NASA officials said. Then the robot will start climbing up Mount Sharp's lower reaches.