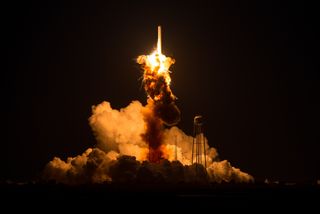 The private American rocket that exploded shortly after liftoff Tuesday evening (Oct. 28) was powered partly by an engine built to get cosmonauts to the moon in the 1960s.

Antares' first stage uses two AJ26 engines, which are refurbished variants of the NK-33 built by the Soviet Union for its ill-fated N-1 moon rocket during the height of the space race. While it's unclear at the moment whether or not the AJ26 played any role in Tuesday's mishap, the engines' age and provenance has already stirred debate, as well as a bit of criticism. [Orbital Sciences' Antares Rocket Explosion in Pictures]

Some of the criticism long predates this week's accident. In 2012, for example, SpaceX founder and CEO Elon Musk said Antares "honestly sounds like the punch line to a joke."

SpaceX and Orbital Sciences are competitors; both companies hold billion-dollar contracts to fly robotic cargo missions to the space station for NASA. To date, SpaceX has successfully completed four supply runs using its Dragon capsule and Falcon 9 rocket. Orbital had executed two such missions with Antares and its Cygnus spacecraft before Tuesday's failure.

The massive N-1 moon rocket — the Soviet Union's attempted answer to NASA's huge Saturn V booster — lifted off four times, with the first launch coming in 1969 and the last in 1972. All of the launches ended in failure, and the N-1 program was canceled in the mid-1970s. But dozens of NK-33 engines remained in the nation's stockpile.

The California-based company Aerojet (now Aerojet-Rocketdyne) later bought some of these engines, then modernized, refurbished and renamed them to fly in American rockets.

The appeal of of the NK-33/AJ26 is clear, said Orbital Sciences executive vice president Frank Culbertson, a former NASA astronaut.

"There are not very many other options around the world in terms of using power plants of this size, and certainly not in this country, unfortunately," Culbertson said Tuesday night during a press conference after the Antares crash.

AJ26 engines are rugged and robust, he added, and they're tested extensively before flight, both at NASA's Stennis Space Center in Mississippi and, after incorporation into Antares, at Wallops.

"These engines were taken through the normal testing — acceptance testing and pressure testing, et cetera," Culbertson said of the AJ26s inside the Antares that exploded Tuesday. "We didn't see any anomalies or anything that would indicate that there were problems with the engine."

An AJ26 engine did explode during a test at Stennis in May, however. The engineers investigating Tuesday's Antares failure are doubtless looking back at that mishap with fresh eyes now.

Antares isn't the only American rocket that incorporates Soviet or Russian tech. For example, United Launch Alliance's Atlas 5 booster, which launches many payloads for the U.S. military and NASA, uses a Russian RD-180 engine in its first stage.

RD-180s are of much more recent vintage than the old NK-33s. Regardless, their provenance makes some policymakers, military officials and other influential people uncomfortable. The United States should not be dependent on Russian technology to launch important national-security missions, they say.