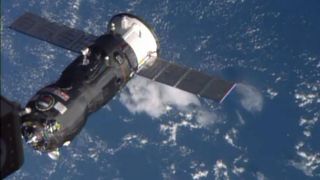 An unmanned Russian cargo spaceship successfully docked to the International Space Station this morning (Oct. 29). The docking comes a day after a private rocket in the United States exploded after attempting to launch on a similar resupply run to the orbiting outpost.

Russia's robotic Progress 57 vehicle docked to the space station at 9:08 a.m. EDT (1308 GMT) after a six-hour journey that started atop a Soyuz rocket at the Baikonur Cosmodrome in Kazakhstan. The unmanned capsule delivered close to three tons of supplies to the station's Expedition 41 crew.

Orbital Sciences Corporation's Antares rocket was expected to launch the company's unmanned Cygnus spacecraft on a similar mission to the space station for NASA Tuesday night. However, the Antares exploded moments after launching from NASA's Wallops Flight Facility on Wallops Island, Virginia. Officials are now investigating the root cause of the explosion. [See images of the Antares explosion]

While NASA officials have expressed disappointment in the Antares failure, the six-person crew on the space station still has plenty of supplies onboard, Mike Suffredini, the head of NASA's International Space Station program office said during a news conference yesterday.

Cygnus and Progress spacecraft are two of the many robotic ships that fly resupply missions to the space station. Orbital Sciences and SpaceX currently hold contracts with NASA to make supply runs to the space laboratory. Japan also uses its H-2 Transfer Vehicles to haul cargo to the astronauts and cosmonauts living and working in space.