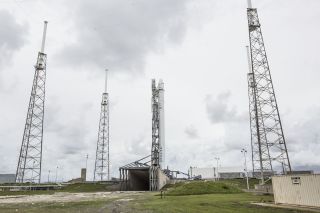 SpaceX's Falcon 9 rocket stands on a launchpad before blasting off into space on Sept. 19, 2014.
(Image: © SpaceX)

CAMBRIDGE, Mass. — The private spaceflight company SpaceX is hoping to bring a rocket back from space and land it on a giant, floating platform in the middle of the ocean, SpaceX founder Elon Musk said Friday (Oct. 24).

The company is expecting to try to land the booster on the platform as part of their next launch to space. Musk explained that landing a reusable rocket on the floating platform — which measures about 300 feet long by 170 feet wide (91 by 52 meters) — is a big step toward bringing the company's Falcon 9 rocket back to dry land. Musk and SpaceX hope to develop reusable rocket systems and capsules in order to decrease the cost of access to space, which could even make a colony on Mars a viable option at some point.

SpaceX has already successfully flown boost stages of the Falcon 9 back to Earth, landing in the ocean after delivering various payloads to space, but the company has not attempted to land the rocket back on a floating platform before. According to publicly released schedules, SpaceX's next Falcon 9 launch is currently scheduled for December, when the California-based company is expected to launch its fifth official robotic cargo mission for NASA to the International Space Station using the Dragon spacecraft. [SpaceX Reusable Rocket Re-entry Caught by Chase Plane (Video)]

"We're going to try to land on [the floating landing platform] on the next flight," Musk said today  during a discussion here at the Massachusetts Institute of Technology's AeroAstro 100 conference. "If we land on that flight, I think we'll be able to re-fly that booster."

Musk doesn’t necessarily think that this first attempt will be successful, however. The landing platform will be floating in the Atlantic Ocean with engines that can be used to keep it in position; however, it could still be "tricky" to land on top of it, Musk said.

Musk expects that SpaceX has about a 50 percent or less chance of succeeding in landing on the next flyback, but future launches and landing could have more chance of success.

"There are a lot of launches that will occur over the next year," Musk said. "I think it's quite likely that one of those flights, we'll be able to land and re-fly, so I think we're quite close."

In July, SpaceX successfully brought its Falcon 9 booster in for a soft landing in the ocean after launching to space, but they weren't able to recover the rocket stage. After landing in the Atlantic, the Falcon 9 toppled over as planned, but, according to a Twitter post from Musk at the time, the boost stage broke apart shortly after the soft landing. Other than that, the July test appeared to go as planned.