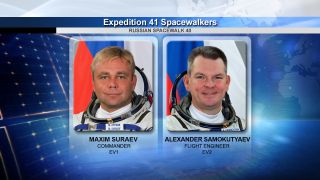 Cosmonauts Max Suraev and Alexander Samokutyaev will take a spacewalk outside the International Space Station on Oct. 22, 2014.
(Image: © NASA)

Two Russian cosmonauts will venture outside the International Space Station today (Oct. 22) to perform maintenance on the orbiting outpost, and you can watch the spacewalk live online.

Cosmonauts Max Suraev and Alexander Samokutyaev are expected to spend about six hours outside the station removing old hardware and performing other tasks. The spacewalk is scheduled to begin at about 9:24 a.m. EDT (1324 GMT). You can watch the spacewalk live on Space.com.

This marks the second spacewalk for both Suraev and Samokutyaev. Last week, NASA astronauts Reid Wiseman and Barry Wilmore completed their own spacewalk, and on Oct. 8, European Space Agency astronaut Alexander Gerst performed another spacewalk with Wiseman.

In addition to removing science and communication hardware, the cosmonauts will collect samples from the Pirs docking compartment and take photos of the Russian side of the station.

On Monday (Oct. 20) the duo prepped for the spacewalk by putting on the spacesuits for a dry run. Suraev and Samokutyaev made sure the controls and communications gear was functioning and made sure there were no leaks in the suits. The spacewalk today will mark the 184th geared toward space station maintenance.

Wilmore, Wiseman, Gerst, Suraev and Samokutyaev are joined by Elena Serova as part of the station's Expedition 41 crew.

Rotating crews of astronauts and cosmonauts have been working and living on the space station since 2001. Now some of the spacewalks are focused on prepping the orbiting outpost for the arrival of crewed commercial spacecraft that could begin flying astronauts to the station as early as 2017.