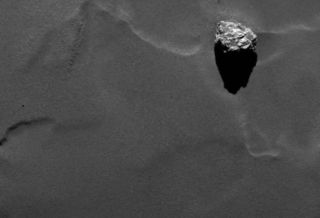 A close-up of a boulder nicknamed "Cheops," which the Rosetta spacecraft imaged on the surface of comet 67P/Churyumov-Gerasimenko.
(Image: © ESA/Rosetta/MPS for OSIRIS Team MPS/UPD/LAM/IAA/SSO/INTA/UPM/DASP/IDA)

Rosetta mission team members have named the 82-foot-tall (25 meters) boulder on Comet 67P/Churyumov-Gerasimenko "Cheops," after the largest pyramid in Egypt's famous Giza complex. The rock is much smaller than its namesake, however, which rises 456 feet (139 m) into the Egyptian sky.

Rosetta first photographed Cheops upon arriving in orbit around Comet 67P in early August. Over the past few weeks, the probe has taken close-up pictures and several wide-angle views that highlight the rock and its surrounding boulder field.

"The surface of Cheops seems to be very craggy and irregular," said Holger Sierks, the principal investigator for Rosetta's Optical, Spectroscopic and Infrared Remote Imaging System (OSIRIS), in a statement.

"Especially intriguing are small patches on the boulder's surface displaying the same brightness and texture as the underground," added Sierks, a comet researcher with the Max Planck Institute for Solar System Research in Germany. "It looks almost as if loose dust covering the surface of the comet has settled in the boulder's cracks. But, of course, it is much too early to be sure."

Many properties of Cheops' boulder field are unknown. Scientists are examining what the rocks are made of, how dense they are and how they might have been created. It's possible that as the comet grows more active, the boulders will move around or become more visible to Rosetta's camera, team members said.

The closest pictures of Cheops were taken from an altitude of about 9.3 miles (15 kilometers), mission officials said. But on Oct. 9, Rosetta moved even closer to the comet to begin an imaging campaign that will take it just 6 miles (10 km) above the surface.

Rosetta, which launched in March 2004, will accompany Comet 67P for at least the next year to see how the icy object changes as it gets closer and closer to the sun.

The mission is the first to successfully place a probe in orbit around a comet, and it will attempt to make some more history next month. On Nov. 12, Rosetta will deploy a small lander called Philae, which will try to make the first-ever soft landing on a comet.