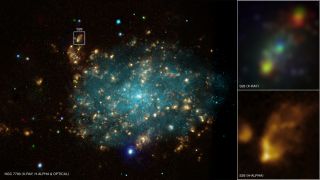 This image shows the galaxy NGC 7793 about 12 million light-years from Earth. The galaxy is home to the voracious black hole P13, which is easily seen as the brightest blue source near the bottom of the image.
(Image: © X-ray (NASA/CXC/Univ of Strasbourg/M. Pakull et al); Optical (ESO/VLT/Univ of Strasbourg/M. Pakull et al); H-alpha (NOAO/AURA/NSF/CTIO 1.5m))

A black hole is eating a star faster than scientists had thought was possible, and it's unleashing unusually bright X-ray signals that may help scientists understand a group of weird, superbright objects in deep space.

In the late 1970s, astronomers discovered sources of unusually bright X-rays blazing in deep space. It was long uncertain what these ultraluminous X-ray sources were. Scientists thought black holes powered these mysteries, with the matter around them giving off light as the black holes ripped it apart, but they disagreed about what the black holes' masses might be. [The Strangest Black Holes in Space]

However, scientists have now identified one ultraluminous X-ray source, and it turns out not to be an intermediate-mass black hole, but rather an unusually bright stellar-mass black hole no more than 15 times the mass of the sun.

The discovery in question is a black hole labeled P13 in the outskirts of the nearby spiral galaxy NGC 7793, about 12 million light-years away. This black hole, by far the brightest X-ray source in its galaxy, was discovered more than 30 years ago by NASA's Einstein X-ray telescope.

The black hole possesses a companion star, a kind of blue supergiant 18 to 23 times the mass of the sun. As gas from this companion gets sucked into P13, this matter becomes very hot and bright, making the black hole at least a million times brighter than the sun.

The astronomers gazed at the black hole and its companion with a combination of optical and X-ray telescopes over the course of eight years — the European Southern Observatory's Very Large Telescope in Chile, as well as the European Space Agency's XMM-Newton and NASA's Chandra and Swift X-ray observatories in space. The researchers determined that the black hole and its companion star complete a very oval-shaped orbit around each other every 64 days.

When the black hole approaches the star, the X-rays from it heat up and brighten the side of the star facing the black hole. By carefully modeling this effect, the astronomers were able to estimate the black hole's mass.

The amount of light the black hole gives off suggests it gorges on gas at an exceptional rate — the equivalent of the mass of the moon every three weeks, or the mass of Earth every four years. This is significantly greater than a theoretical maximum known as the Eddington limit, which is the point at which the energy given off by matter rushing toward a black hole should curb the amount of matter feeding that black hole.

Increasingly, research suggests black holes can overcome the Eddington limit. These so-called super-Eddingtongrowth rates could have a number of different explanations — for instance, radiation that might normally help push matter away from the black hole could get absorbed by matter falling into the black hole, Motch said.

The black hole discovery is detailed in the Oct. 9 edition of the journal Nature.